Ronny Burmer is a frequent top competitor on the national IPO championship scene. His smooth handling and calm disposition on the field are nice balance for his fiery and powerful choice in dogs. When Ronny walks on the field, one can be assured of solid performance.  I first noticed Ronny on the sidelines at a national in 2015 after he had just finished a terrific protection performance where his dog Kim nearly knocked the hat off the helper, Don Yelle. It was awesome display of power and controlled guarding.  The performance starkly contrasted Ronny's quiet nature off the field.  I noticed he stood alone quietly watched almost every dog on the field intently and I could feel his passion and enjoyment in seeing quality dogs.  I have photographed him perform at a number of championships. Ronny is a legitimate competitor. 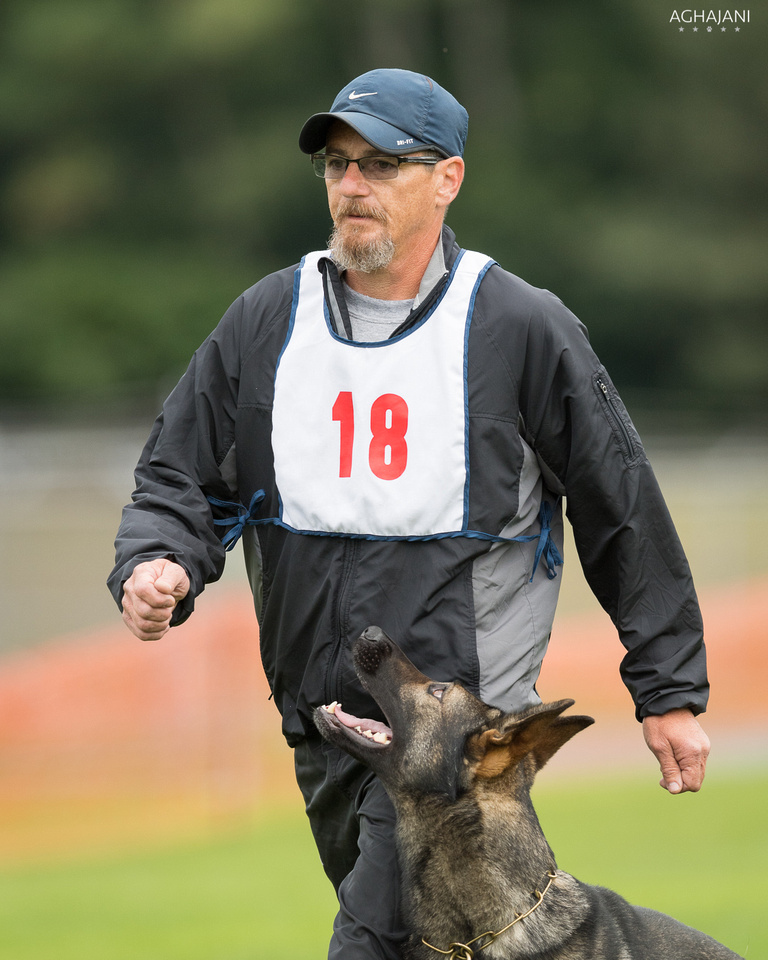 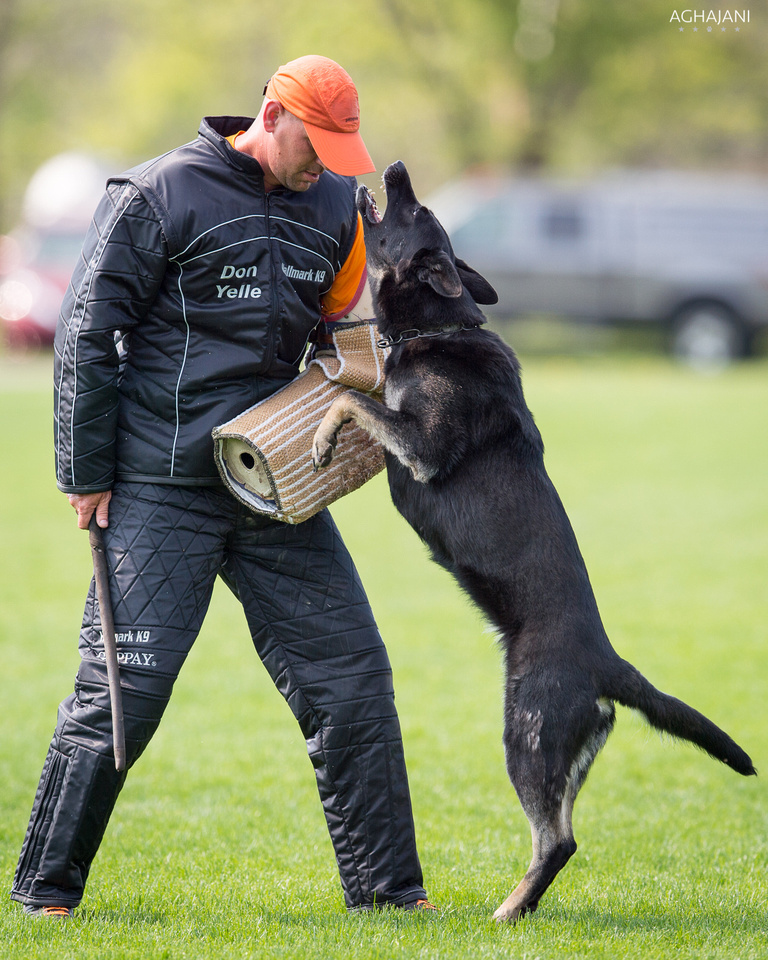 Ronny is the son of German Immigrants.  He grew up Queens, New York with German Shepherds in the house and the family has folklore of German Shepherds going back to before World War II. Dogs were a way of life that stuck.  Their dogs were family pets, they didn’t train but still had a devotion to the breed. 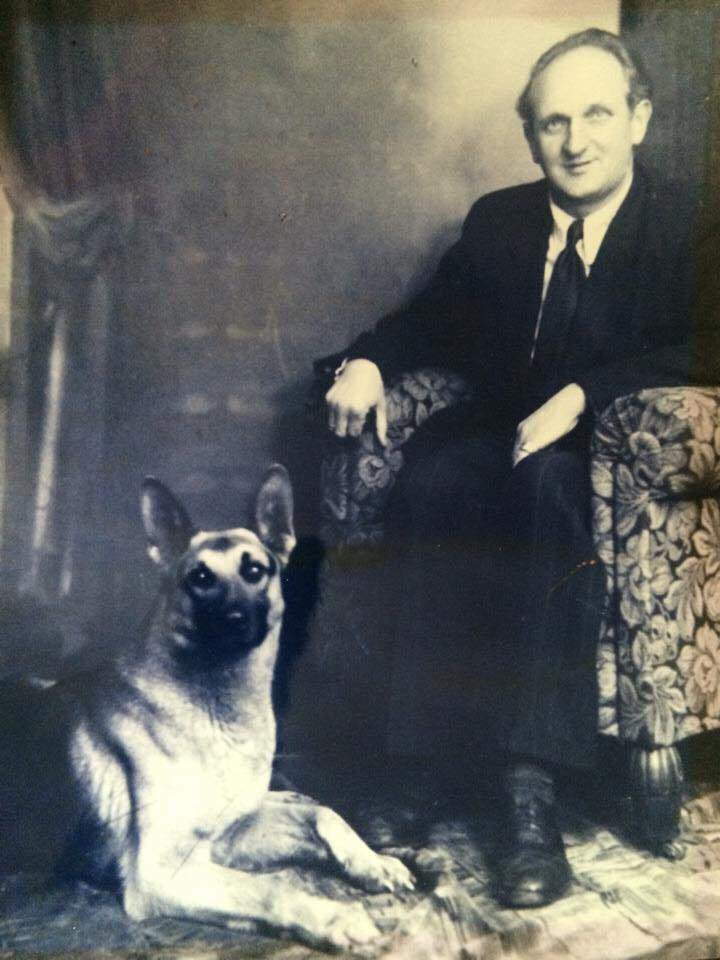 Ronny became aware of Schutzhund from seeing the dog magazines in eighties (there was no internet).  However, his start in the sport would take almost a decade because the clubs he reached out to were not welcoming to a newcomer. The clubs would not return calls and gaining access to training seemingly had barriers.  He said he almost gave up on the sport before he even started, but stuck it out and feels lucky he did because the dog sport is now such a important part of his life.  Eventually in the nineties he started to go to Long Island Schutzhund Club. At the beginning, he was not allowed to speak at the club, only the helper an training director could speak.  He got his first working dog to train with at this club, it was a female GSD that was on the softer side.  He eventually came to the realization that he would need a different dog if wanted to be serious about Schutzhund, one that was better suited to work.  IPO is intended to reveal character and sometimes discovering your dog's potential can be an painful learning experience. The next dog was a very powerful male but lacked nerves which made the training sessions unpredictable and scary.  His early results were a little disappointing but he took it in stride. Meanwhile he started doing more and more helper work at the club.  He quickly developed skills which kept him keenly interested in the sport providing him with ample motivation for each training night. Moreover, it helped him understand and acquire a feel for dogs.  Chris Banke was a big influence and mentor in helper work and got Ronnie on the right track.  Mentors are critical in the early stages of the sport. That feeling for the dogs would prove instrumental when he got his third dog. This time he found a quality working-line dog, well suited to his training style, they bonded and quickly advanced to their first SchH3 title. 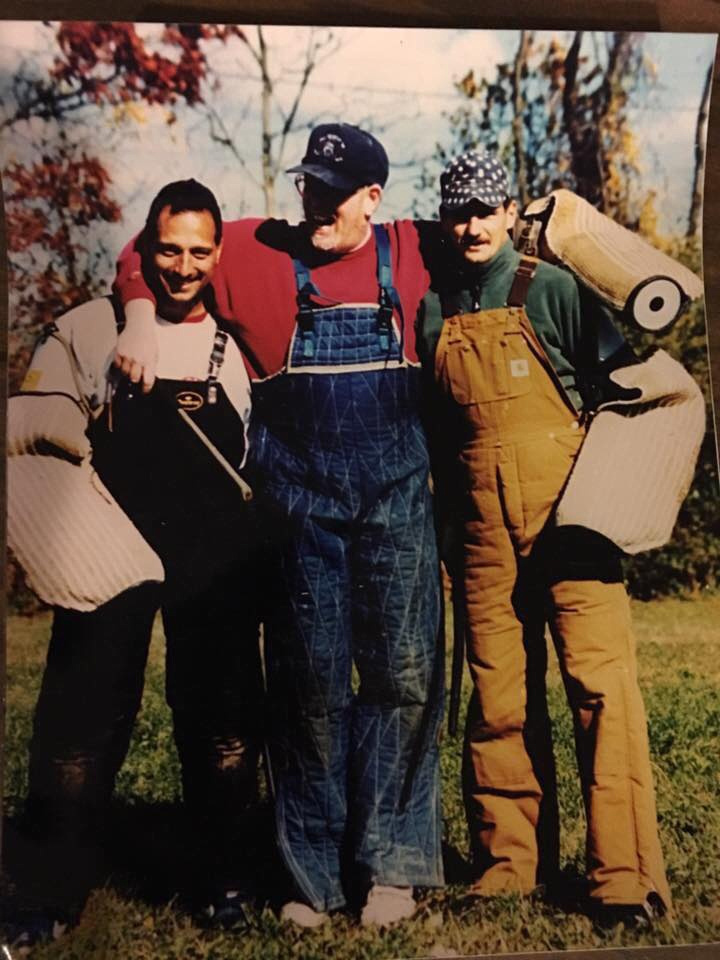 As his development of training started to plateau, Ronny felt need to expand his training horizon.  Every competitive handler gets this nomadic feeling it at some point, it's a sort of training-wanderlust.  The training trips took to him to increasingly distant clubs that offered better skilled helpers and more advanced training to fuel his fire. The exposure to these other clubs inspired Ronny and his friend Bob Demaio, to create their own club. They called it the Mid-Island Schutzhund Club in New York and the concept for it would be to bring these training ideas they had seen on their travels home to like-minded working dog people in his home community.

A fairly major life event came when Ronny and his wife Michele decided to move out of the city for a more rural lifestyle. They sold their home in Queens, New York and moved the countryside in Berkshires, Massachusetts.  Once there, Ronny joined the Ocean State Schutzund Club where he trained with two of his influencers, Dave Wood and John Soquino. The scope of his training during this period was to simply train.  He had no other goal than to title his dog at the time. 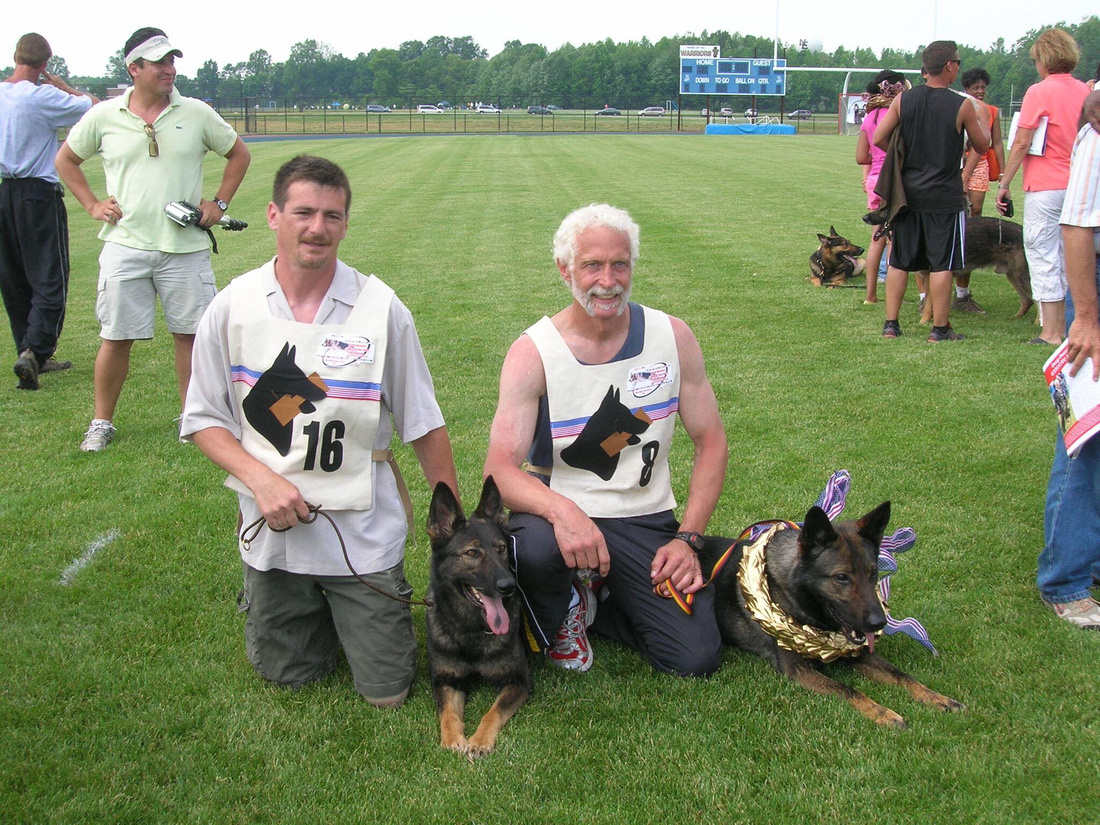 Then in the early 2000 two things happened that changed everything:  He began working with a very promising young dog named Issa vom Haus Sofko (Tasha) and he attended his first big IPO championship.  The championship was the New England Regional Schutzhund Championship and Ronny was blown away with the high caliber of the performances.  It left an impression that would last to this day. He made it his mission to show at championship level. 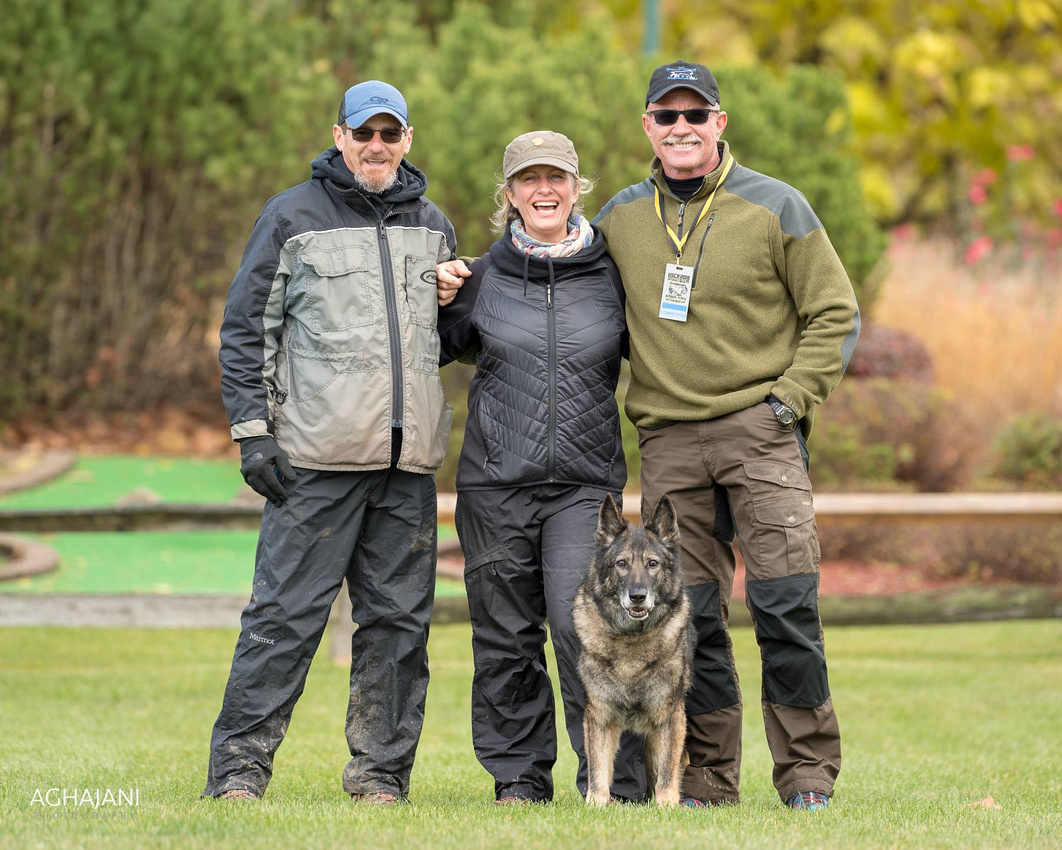 Ronny is still on the path of his dog sport journey. To date, he has titled 8 dogs to SchH3/IPO3, competed in more than 20 national working championships, placed on podium for FH National Championship and competed on the USA Team at the FCI World Championship.   More recently he began competing with dogs from his own breeding program, vom Burmeister.  The culmination of his dog experience is the ‘A’ litter.  Aldo vom Burmeister is a proven national competition dog that has taken down helpers twice in championships.   Allie vom Burmeister, trained by Frans Slaman, earned 3rd at the 2019 GSDCA National IPO Championship and qualified for the Universal Sieger in England.

I asked Ronny to provide advice for a newbie: “A lot of people get discouraged, the sport is a difficult one to get into. There will be a lot of setbacks, the sport will humble you. Until you have some successes, the setbacks will make a beginner want to quit.  It is important to choose a known blood-line that is suited to the sport.  Equally important is that the dog be suited to your handling style.  Above all you must have a bond with the animal. Find and immerse yourself in a club where you feel support. Once you have these foundation blocks in place you will be in a good position to be successful and the sport will bring a lot of satisfaction and enjoyment. You need to train like you're in a trial, and trial like you're training. Always give your best to the dog. The rest, stuff like titles and podiums, are a byproduct of these foundational parts and commitment.”

“The sport used to be sort of underground and grass roots.  But the training has advanced so much that it’s much harder to podium at championship.  It can be discouraging to compete because the highest levels may seem out of reach.  Just keep it in perspective, enjoy the experience with your dog.” 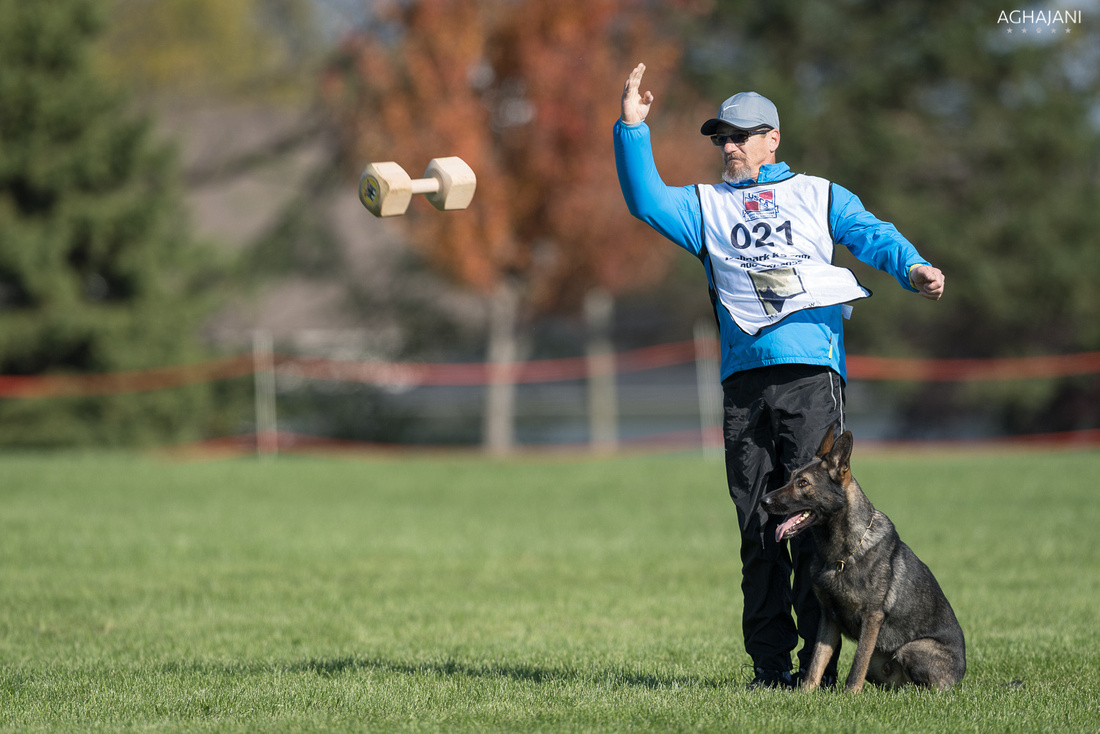 The tracking phase is Ronny’s favorite and it is also his weakest. He enjoys the calm time spent with his dogs and is fascinated with the process.  He relishes getting up early to hit the road with his dog while the roads are clear, and having coffee at the tracking field. “The dog is independent and free. It can be nerve wracking but thrilling at the same time.  When you get a good score, it’s the best feeling in the world!”

Ronny is a student of the sport. He has kept every dog sport magazine and article clipping from the beginning of his involvement in the sport.  “I’m kind of a pack rat with anything having to do about dog sport.”  He is a good example of a person living his life in alignment with his heart's calling.

I thoroughly enjoyed spending my evening interviewing Ronny.  He and his wife Michele were gracious, funny and interesting. I look forward to seeing both of them at a championship somewhere around the country. I know I will, they love dog sport with their whole heart and leave nothing in reserve.  There is something compelling about being around people with this level of commitment.  They are a great role models for a newcomer to the sport, to stay your course and not get discouraged. The good things in life will not come easy. That’s what makes it so satisfying when it does. 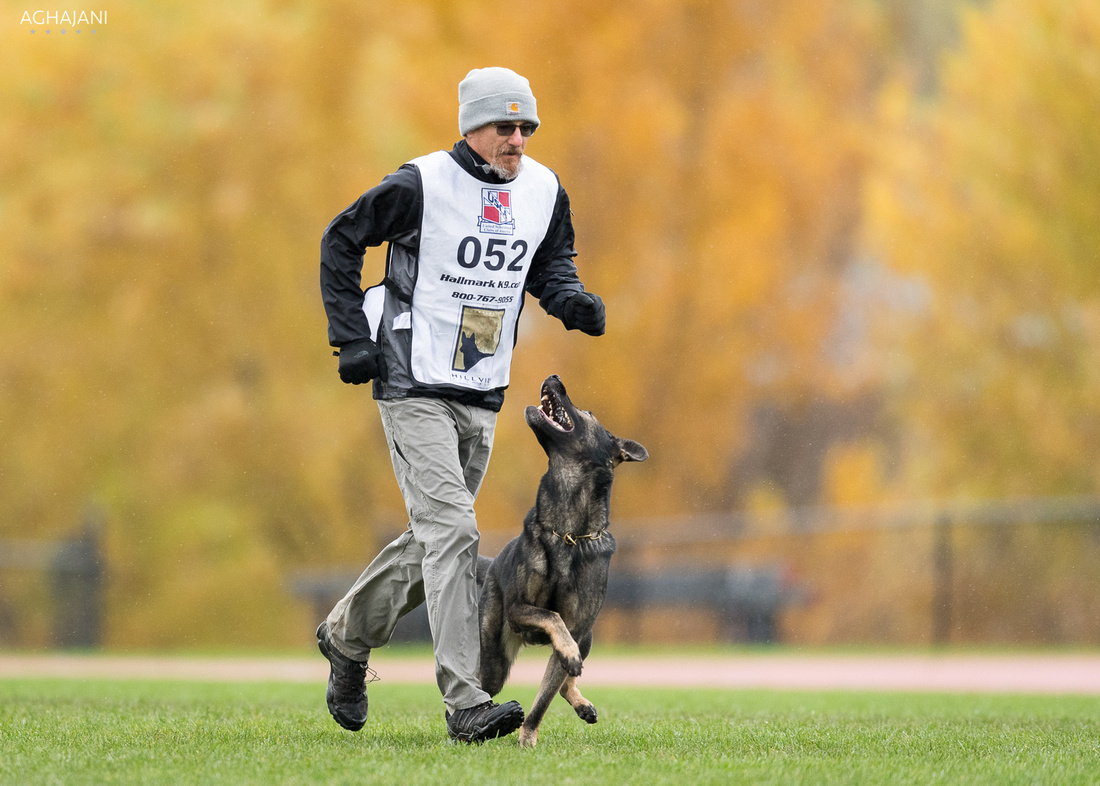 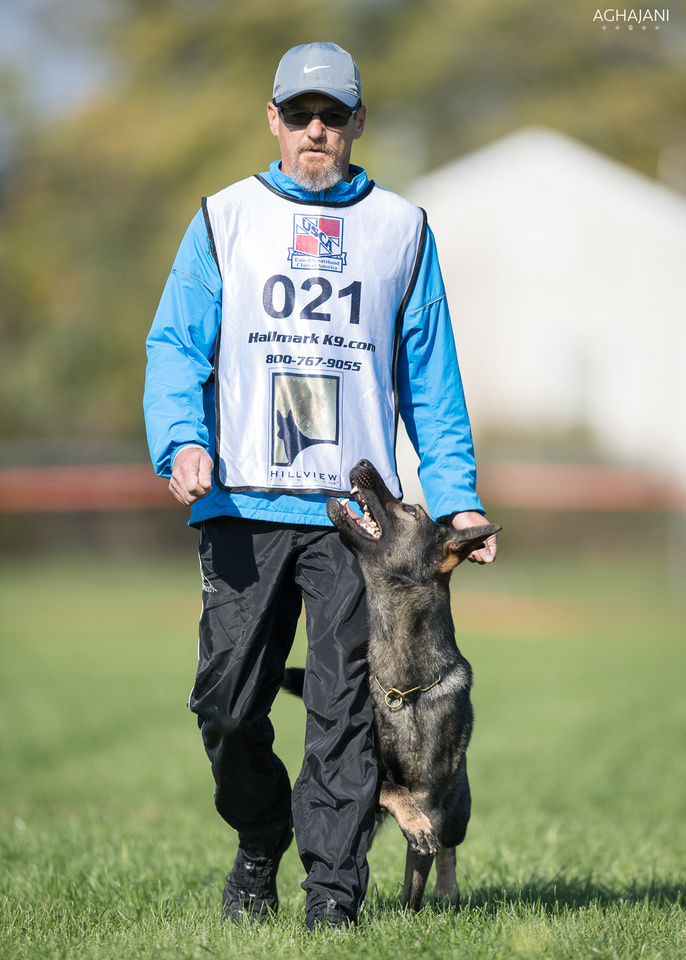 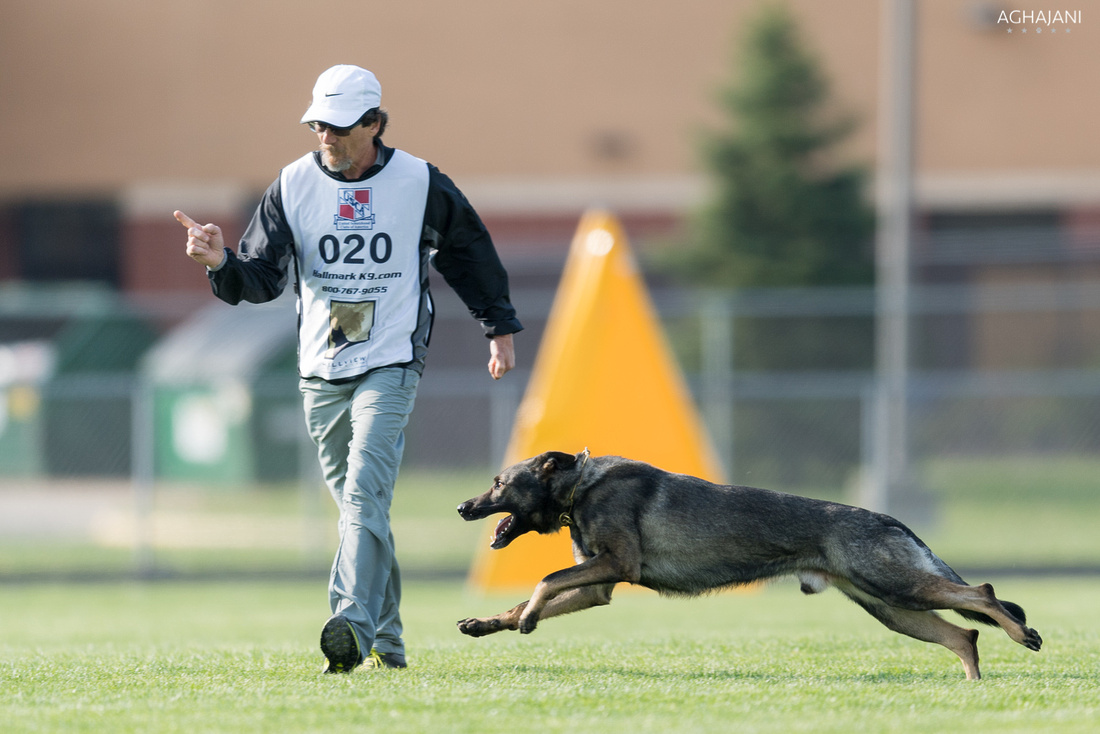 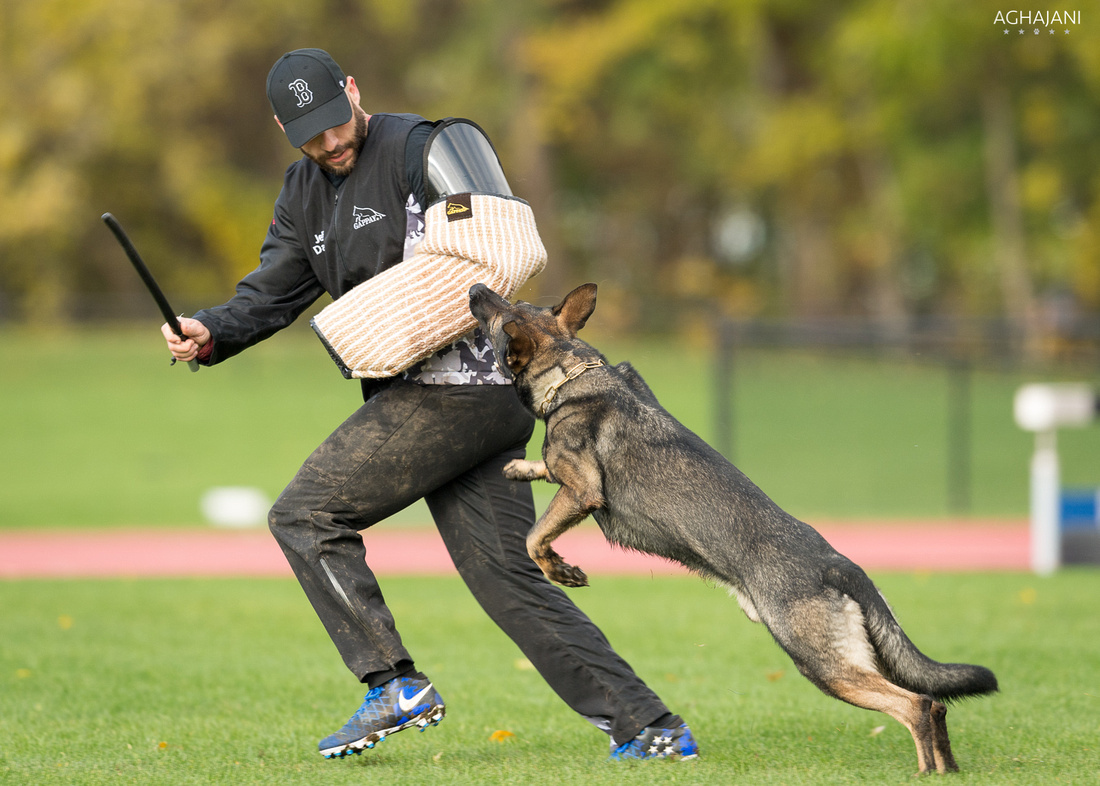 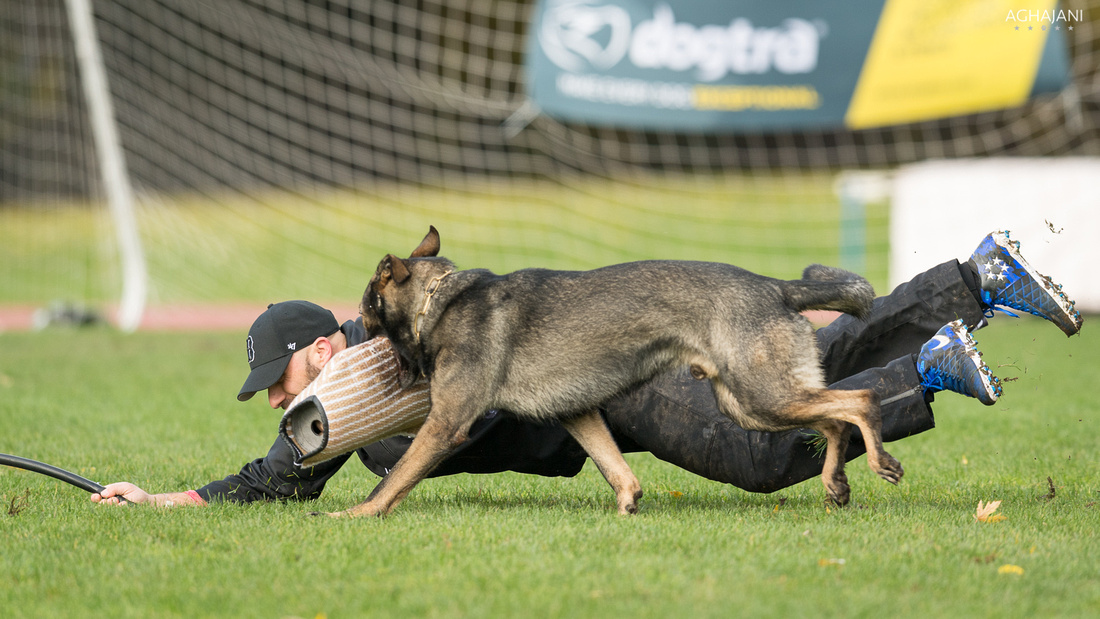 This is not the first time Aldo vom Burmeister has taken a helper down. He did it at the 2018 New England Regionals and again at the 2018 USCA GSD National IPO Championship. Pittsburgh, PA. 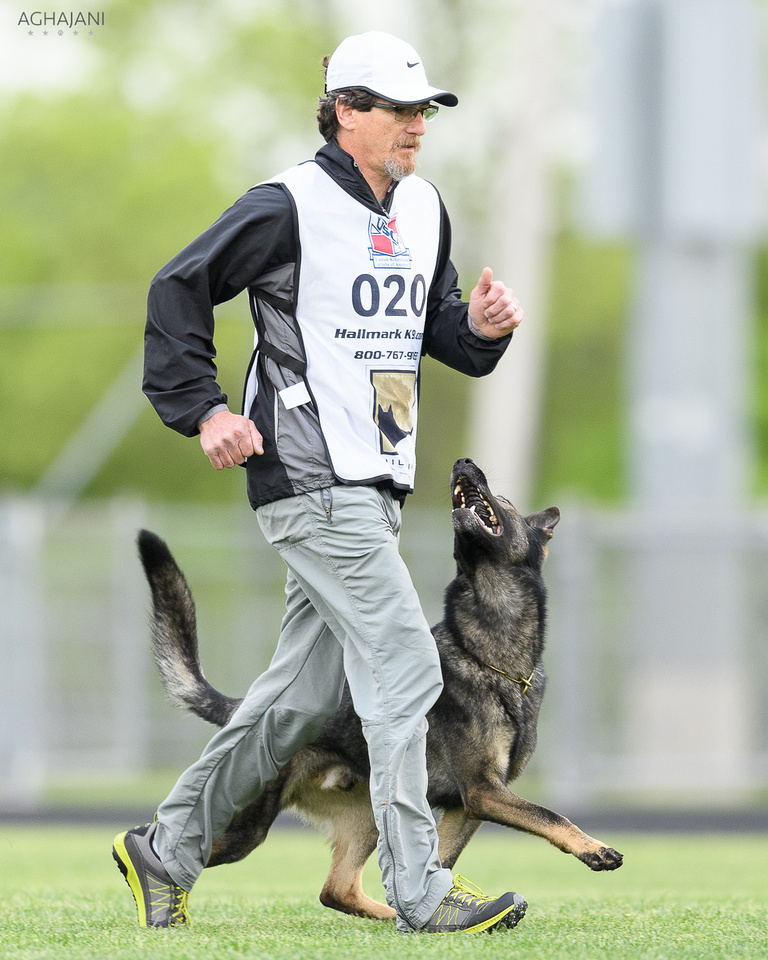 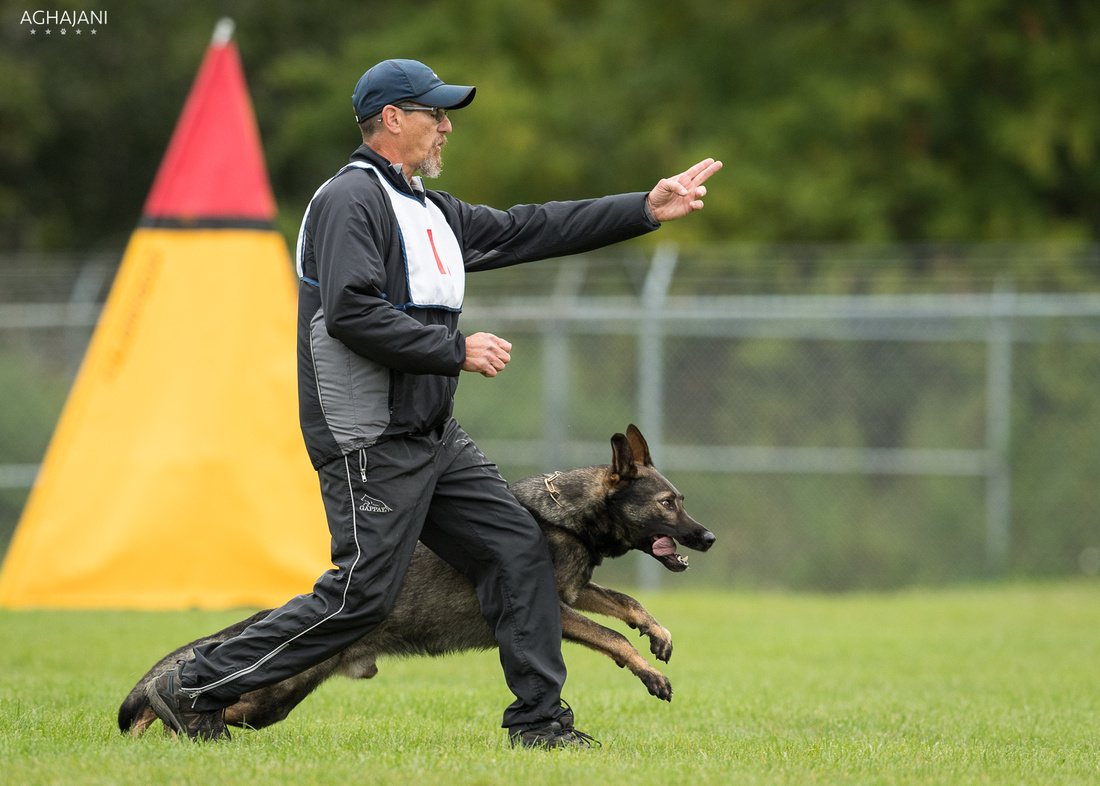 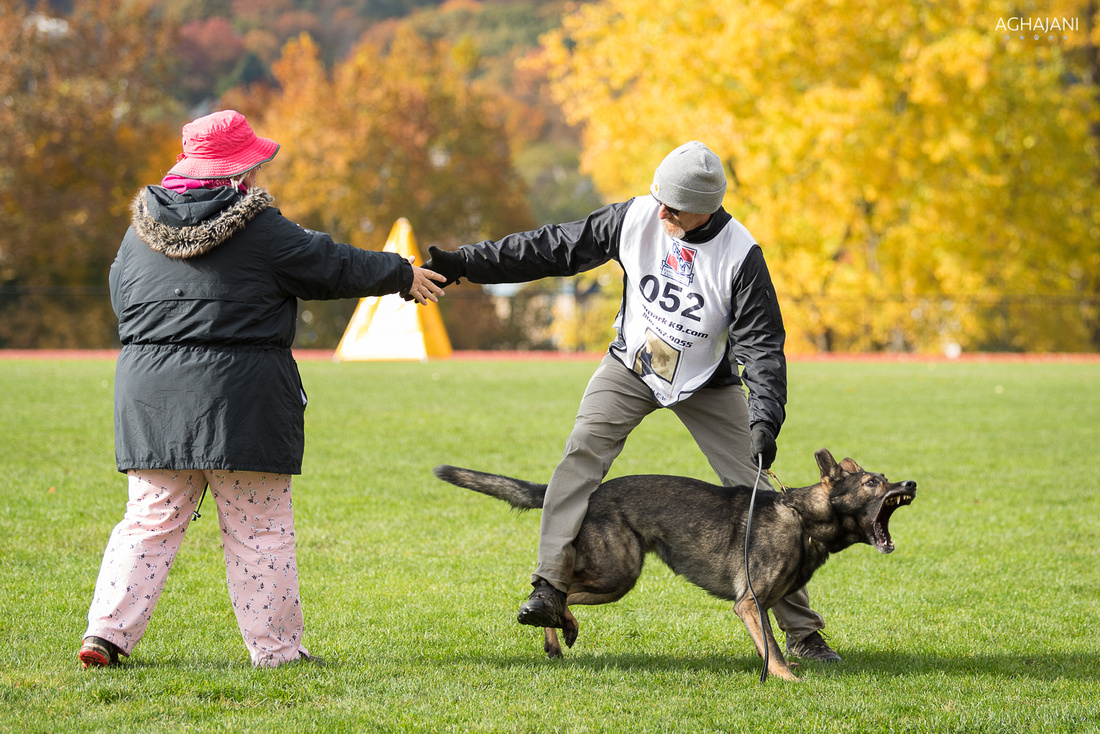 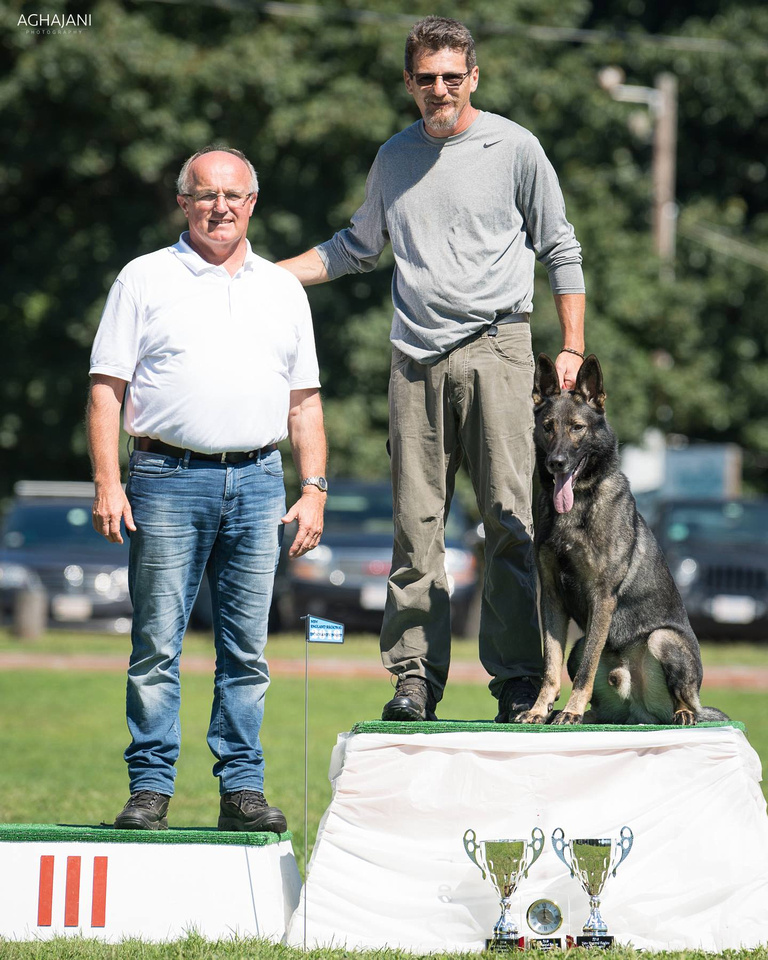 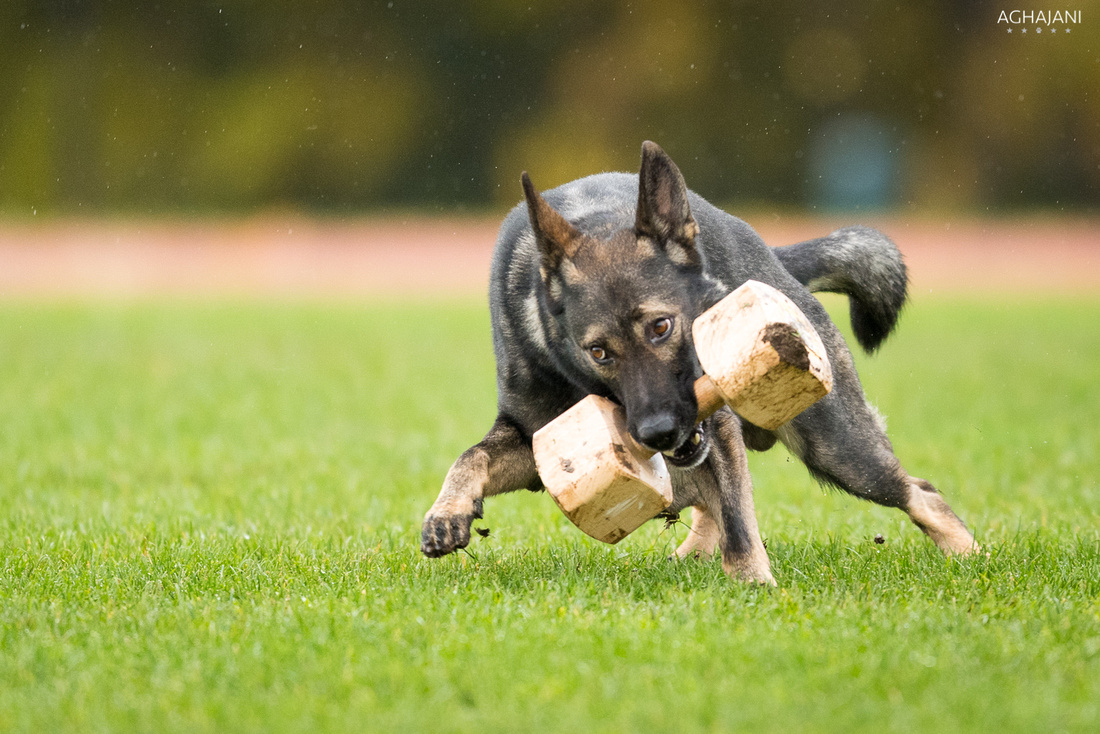 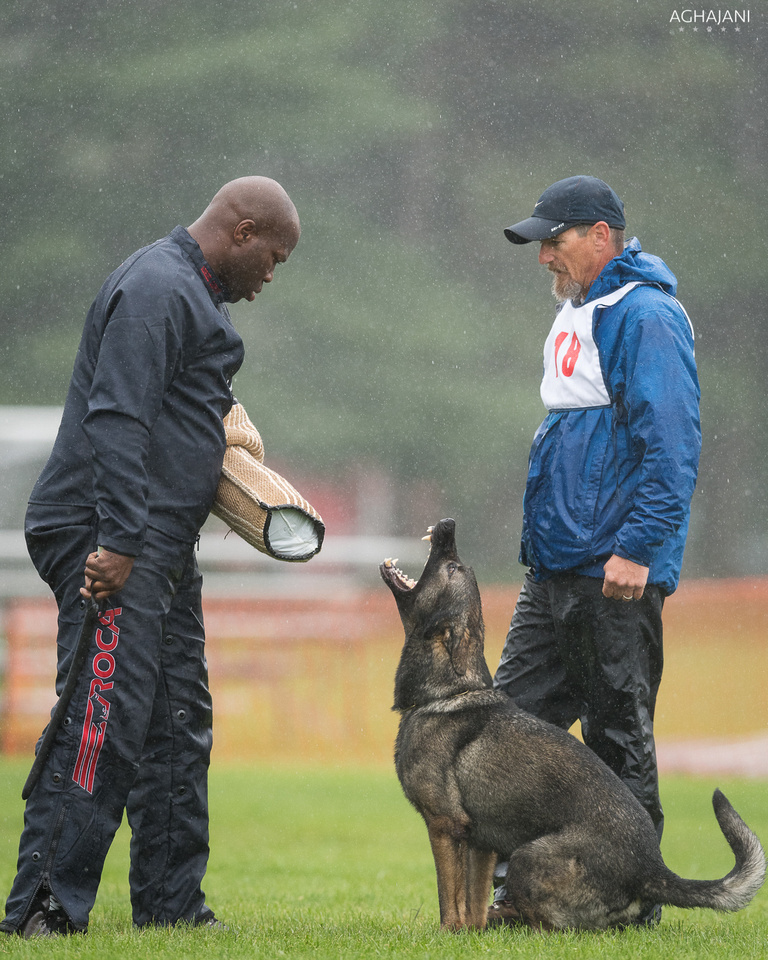 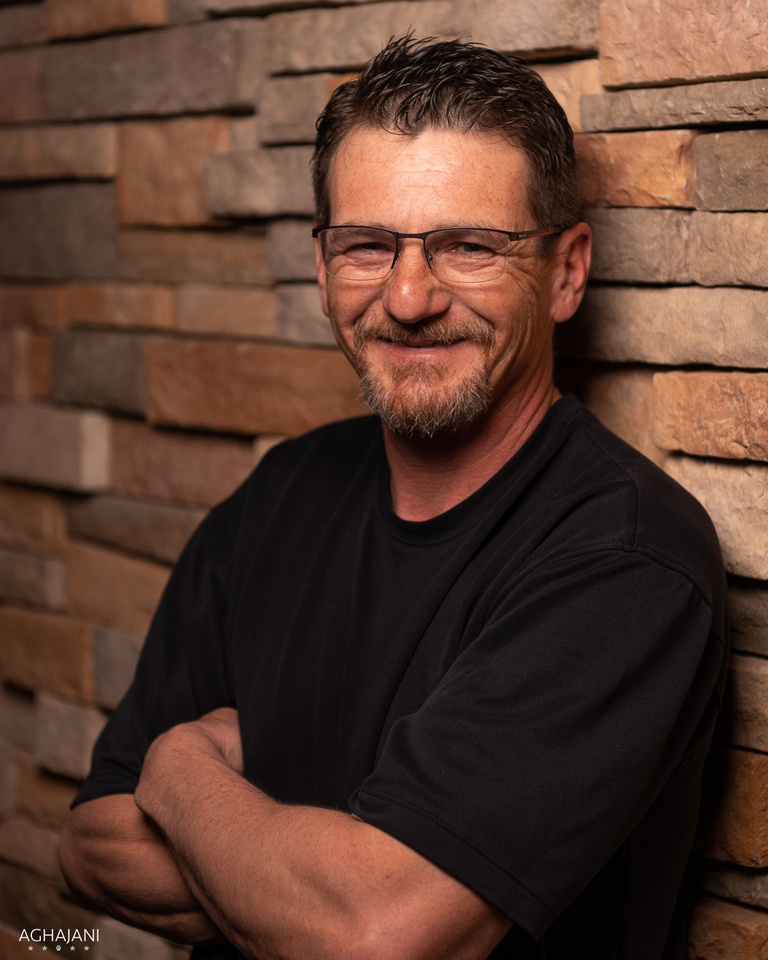 Ronny on the night of our interview 2019

Brian Aghajani is a freelance photographer based in Houston. He began his fascination with dog sport in 2000, has titled three dogs to IPO3 and competed in a handful of national IPO championships. He is an official photographer for most National IGP/Mondioring competition including the USCA, GSDCA, GSDCA, AWDF, AWMA and USMRA as well as the WUSV World Championship.  Follow him on facebook