At the 2019 WDC in Sturbridge, Massachusetts, there were a whopping 79 entries (73 IGP and 6 FH).  Remarkably, six of the entries came from one kennel: Mack-Zwinger.  Four offspring competed with their parents Elsa & Eiko.  How this came about is the subject of this blog:   Karen MacIntyre, of vom Mack-Zwinger kennel. 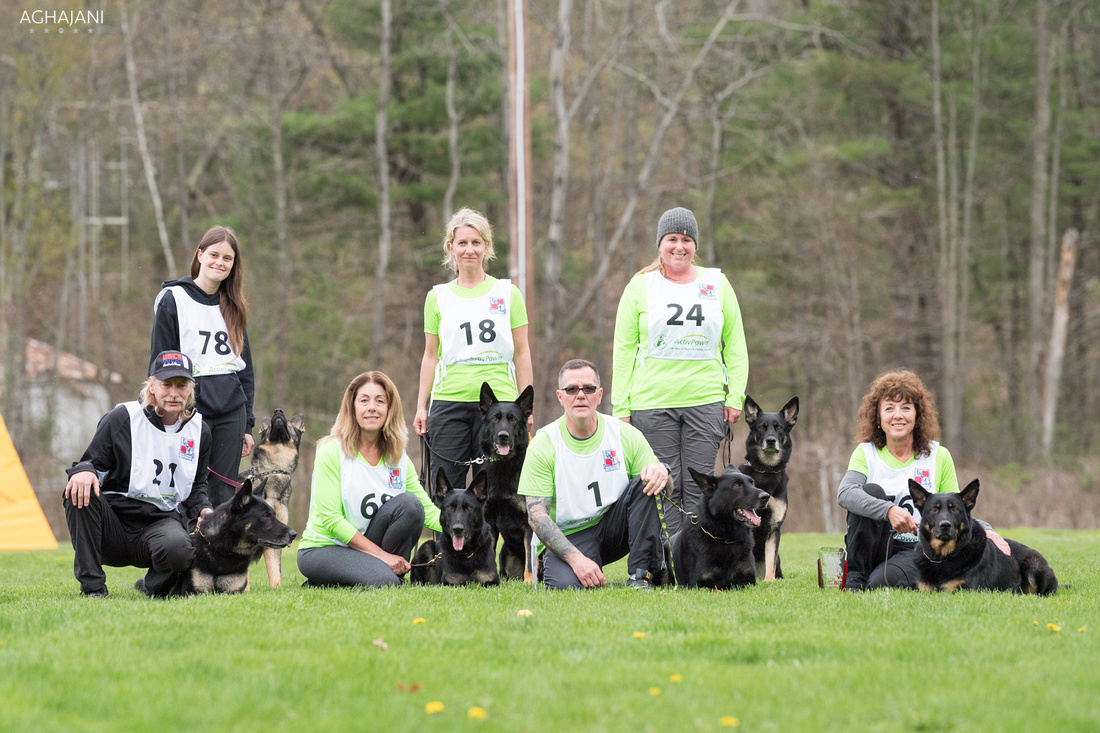 Karen is an USCA IGP Judge, USCA Conformation Judge, USCA Breed Warden, National level IGP competitor and Breeder. Following is the roster of vom Mack-Zwinger dogs entered in the WDC with one additional dog that although is not vom Mack-Zwinger, but was sired by one of her dogs. 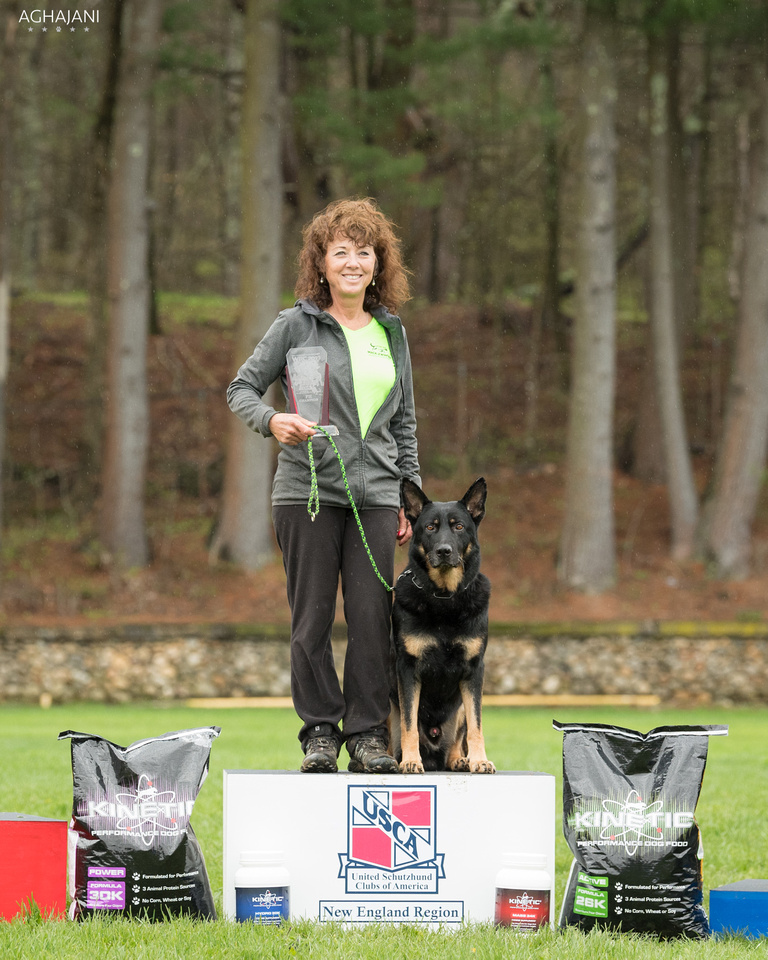 Karen grew up in a family that loved and raised German Shepherd Dogs.  After graduating from school she was able to get her own dog in the 70s and quickly took to obedience training. She started with AKC obedience at first.  Then one day during a veterinarian visit, the vet suggested Karen check out Schutzhund as it was called then (now called IGP).  She started with the North American Schutzhund Assoc. in 1981 and then moved to USCA in 1983.  She competed in 15 national championships, all with Handler/Owned/Trained (H.O.T.) dogs.  Meanwhile, she also trained many of her dogs for search work which included cadaver, water and rubble searches.  She found that many within the working search dog community had negative association with Schutzhund dogs for that type of work due to temperament needed.  Overcoming this stigma was a big motivator in her selection and philosophy for her breeding program.

Vom Mack-Zwinger breeding philosophy was heavily influenced by a frustration in finding working dogs with good environmental temperament.  Karen above all wanted a balance of drives, environmental stability and structure. She found this combination and balance to be a rare combination.  She was also disappointed in the direction many of the show and working lines were headed.  She set out on her quest and whelped her first litter in 1981. 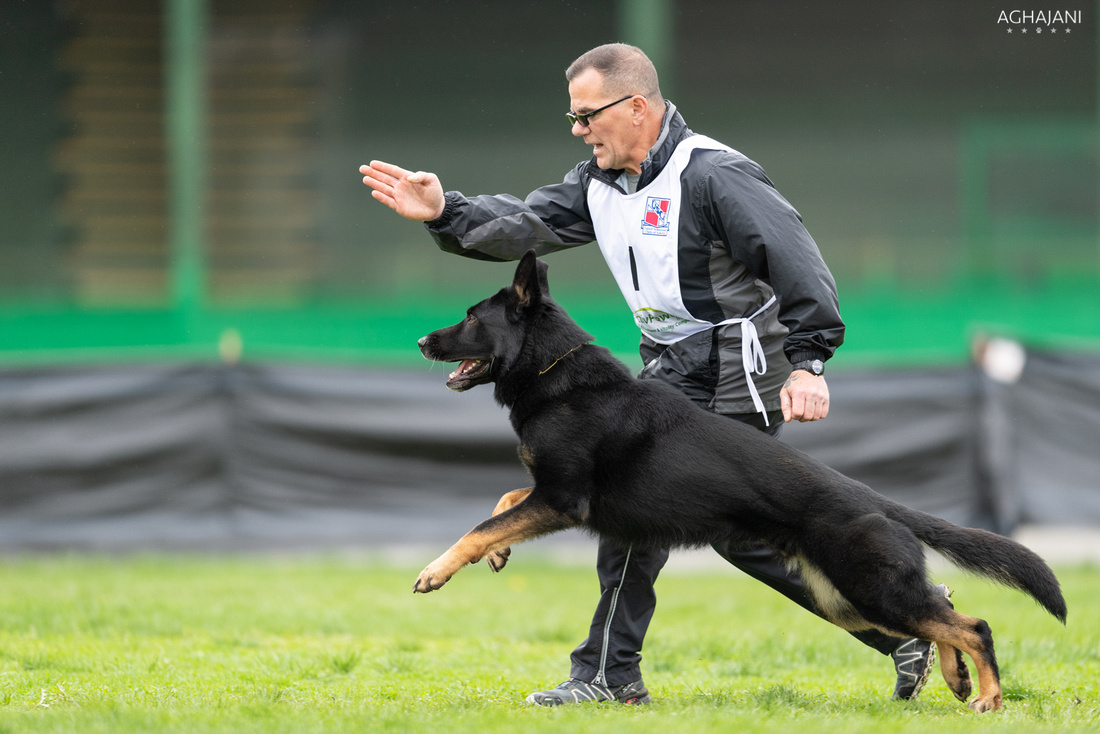 Her breeding program was proven in IGP competition as well as search & rescue.  There was a key decision that ultimately resulted in the large representation in this years WDC.  It was about ten years ago, having followed the offspring of Sid vom Haus Pixner (particularly with search dogs in Austria) as well as working-confirmation balance in the J-litter Talka Marda, Karen learned that Ajay Singh was planning a litter from of these dogs in 2007.  She took the risk on a puppy from this breeding named Nessie vom Patiala.   Next, she found a diamond in the rough, Uno vom Siegener Krochnen, a very strong dog that had been through multiple handlers before he found his home with Karen.  Uno and Nessie were Karen’s idea of the dream match. They produced the EE liter (Eiko and Elsa) which is the foundation of what is shown in these photos today.  EIko has won the FH Championship at this event and is a x4 IGP National competitor. Elsa is a multiple-time national IGP competitor. Four of the offspring competed in this event with their parent Eiko and Elsa.  Eiko is also certified cadaver dog (IPWDA Cadaver & Water), water search dog and rubble disaster dog (RH2). 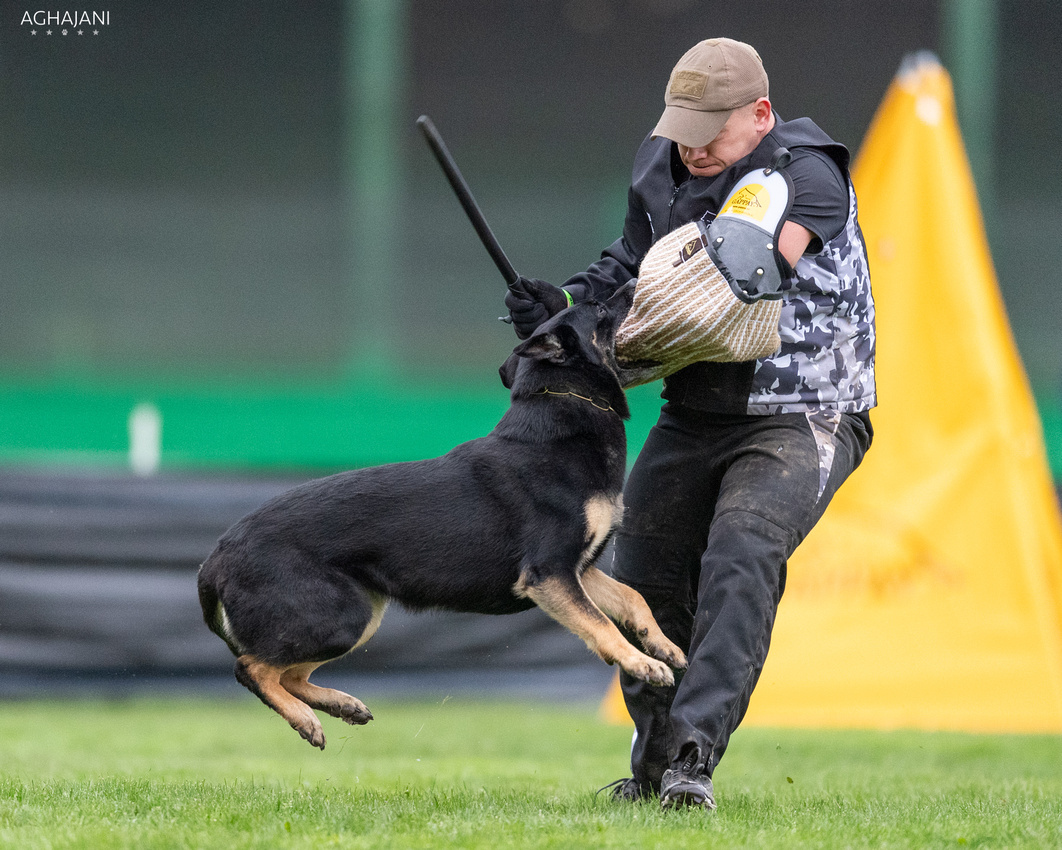 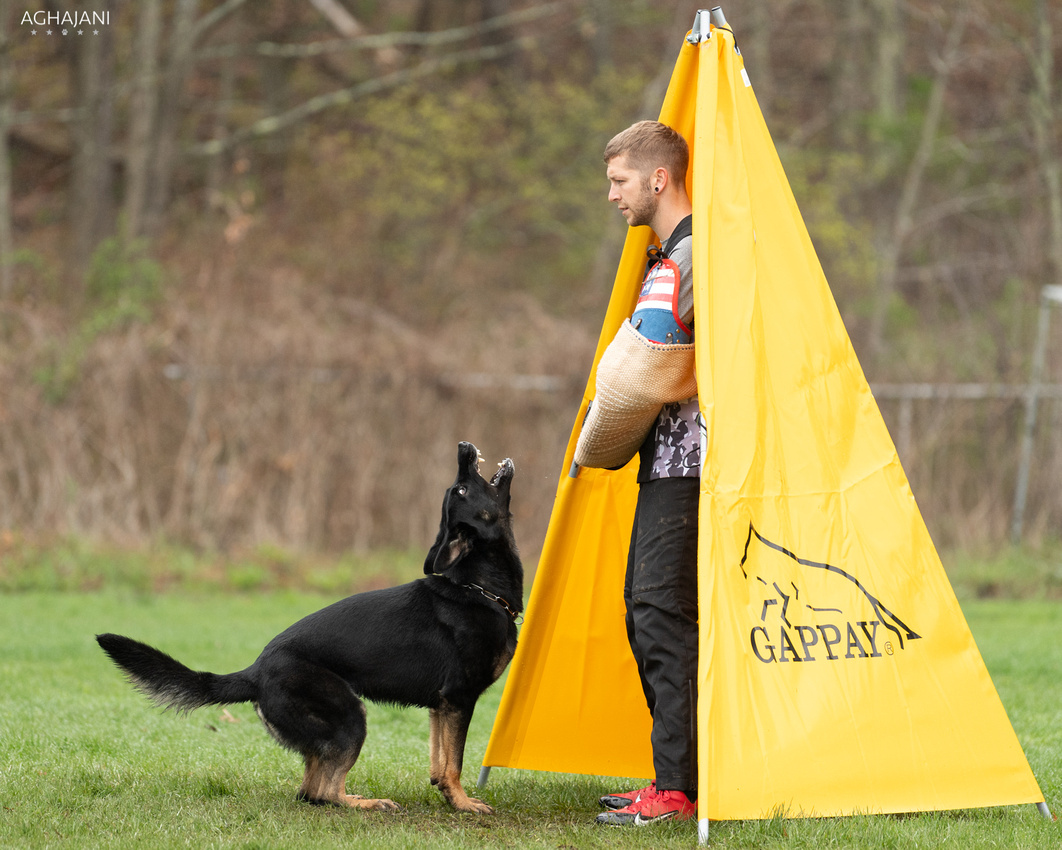 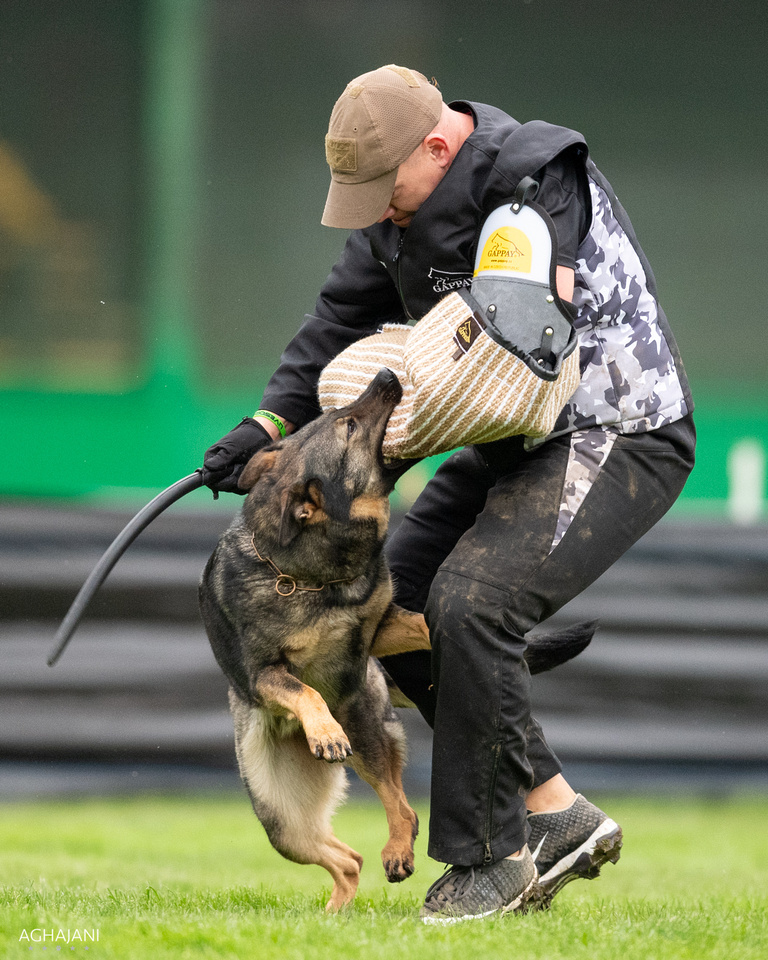 Karen’s primary source of motivation is her training group. Her friend and fellow competitor Claudia Hoffman keeps her encouraged to put in the work.   Her dog sport club, Southern New Hampshire Working Dog Club, is a serious club focused on high level competition. She also trains with, and finds inspiration from, with multi-time national champions and world competitors Mike Diehl and Frank Phillips.

Her advice for a person new to the sport is to “hang in there!”  It takes a lot of work before you start to see the results and be prepared to put a 100,000 miles on your car before you get anywhere.   She subscribes to the Philosophy “do something to get something.” It works in training, it works in life…it just works. 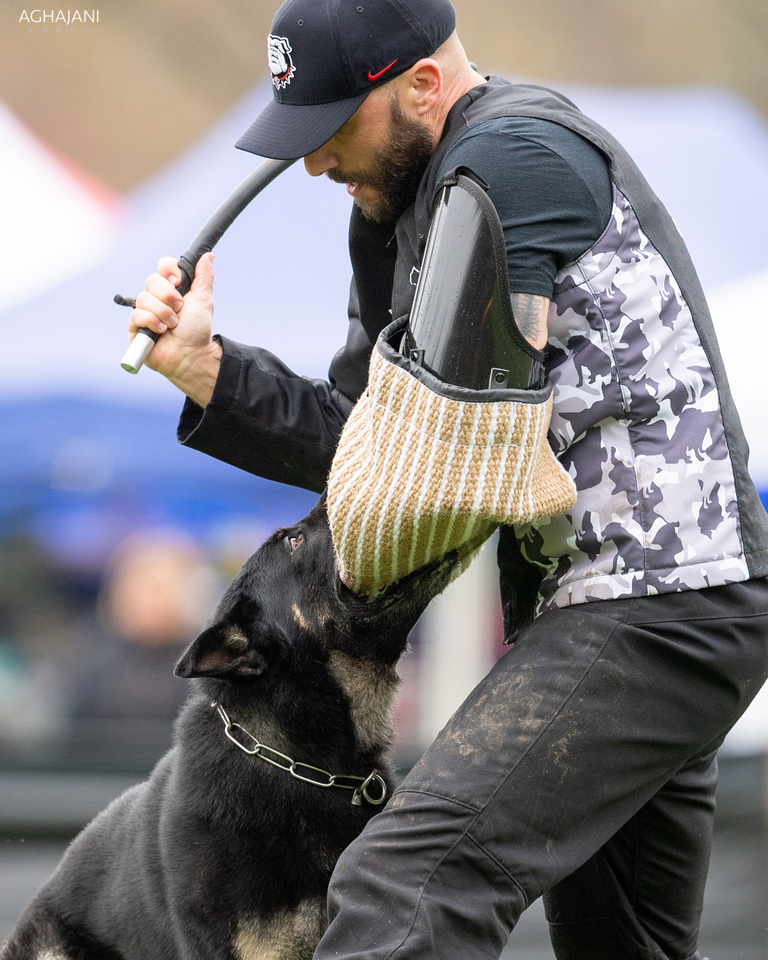 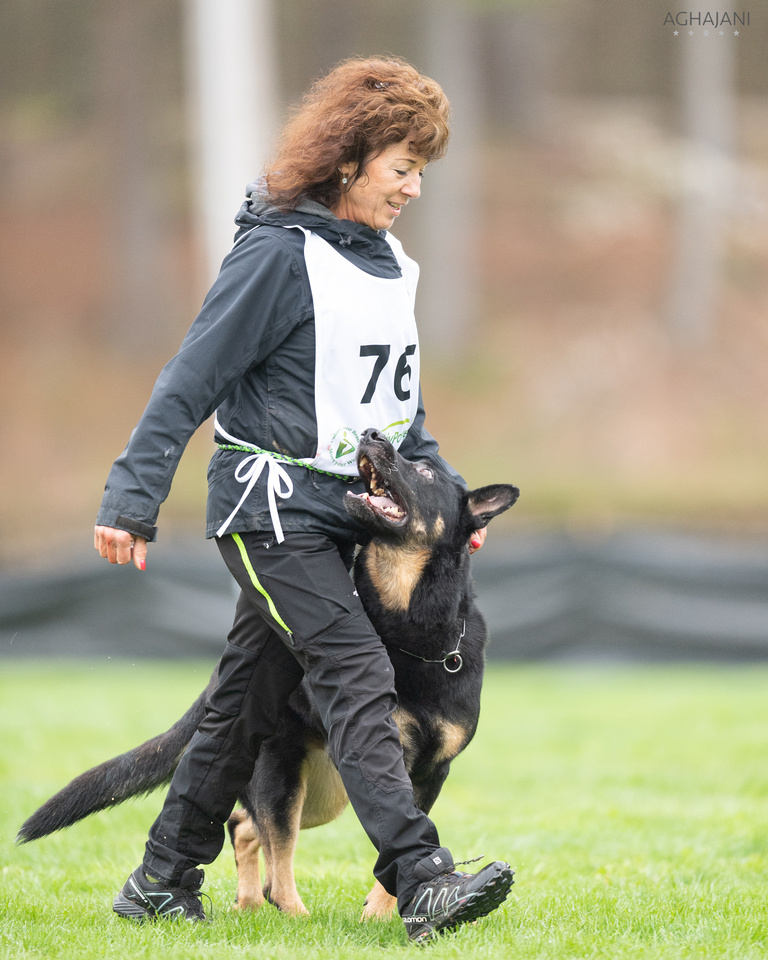 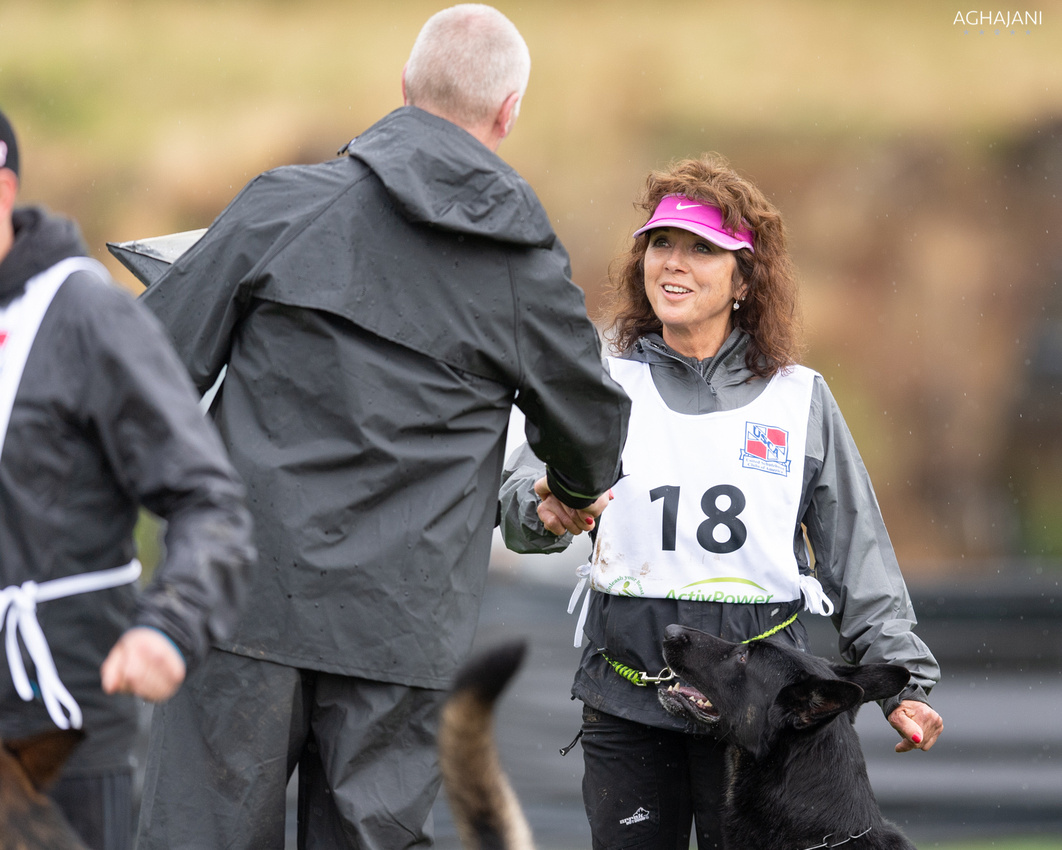 I don’t know if we will ever see this incredible achievement of a six dog from single kennel competing in a national championship again. I was glad to have been there and photographed this remarkable event.