On my recent trip to San Jose, I hoped by arriving at 8:30pm on Friday night might make it possible to drive to my first training club, South County Schutzhund Club (SCSC), in time to maybe catch the last handful of dogs doing protection. Dave Deleissegues is the Training Director at SCSC and an all-round awesome individual. Dave was instrumental in titling all three of my dogs and any chance to visit is is a treat. 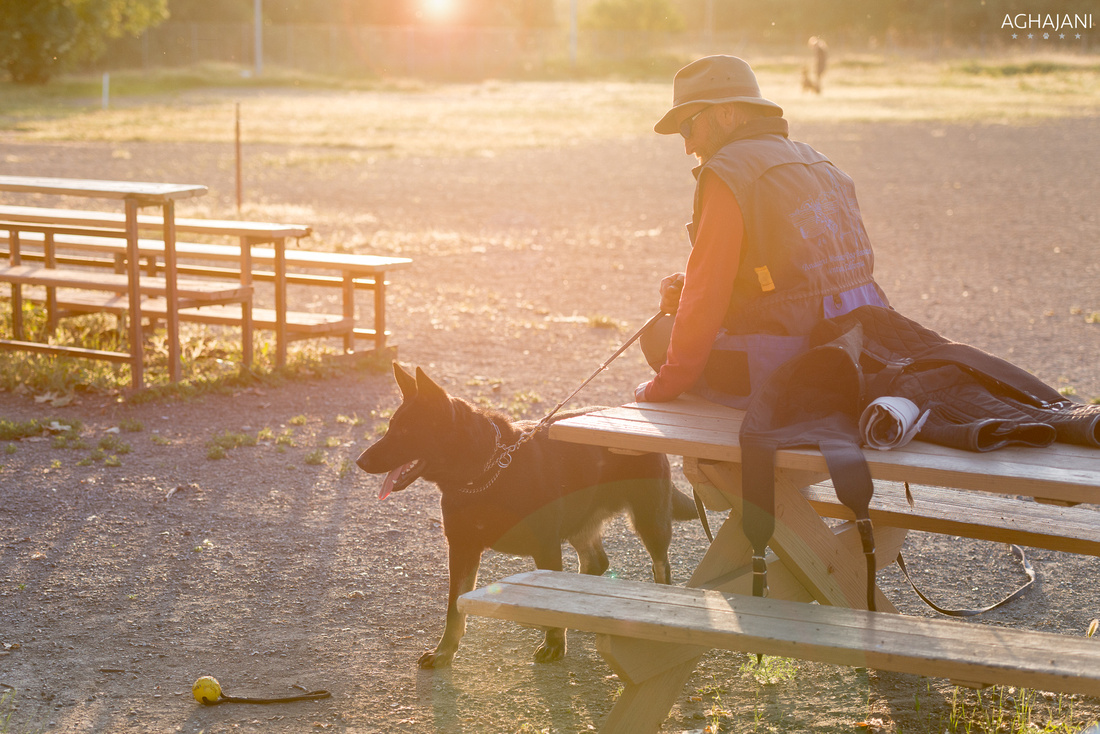 To an outsider, SCSC is little more than a fenced dirt lot along side HW101 with a tiny storage shed and six floodlights.  In fact, I remember as a youth I rode past on a bicycle and wondered what the heck it was for!  However to members of the club it holds mystical qualities.  This is where our second family meets twice a week. It is hallowed ground where magical transformations happen. It is where we stay late into the night practicing and working the tiniest training details, in hope of bringing out the best in our dogs.  It is where Dave Deleissegues works his mad skills and where so many legendary IPO trainers and competitors have worked their dogs.  Respected names like the Igon Vollrath & his sons Martin and Thomas, Dean Calderon & Ivan Balabanov worked their dogs here. This my friends, is the place! 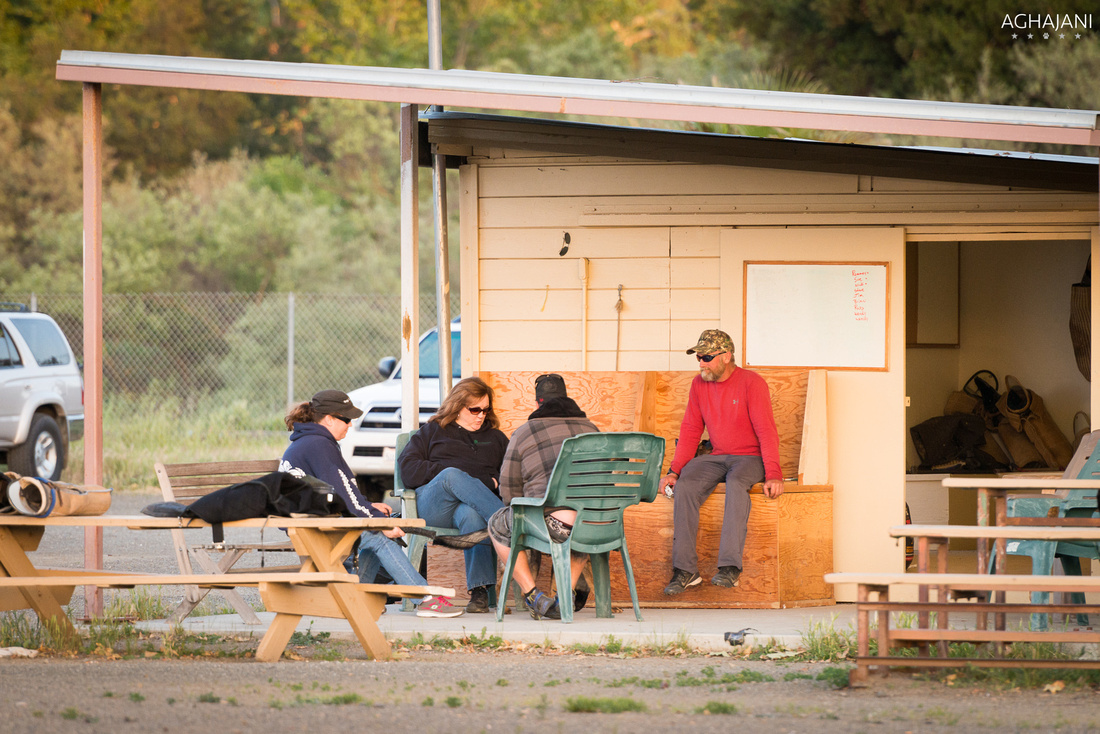 On this night the club members were preparing for the Northwestern Regional IPO Championship which will be held near Sacramento in two weeks.  The raw energy and nerves of being at pre-trial in the training cycle came rushing back to me.   The weather was a seasonal Northern California summer evening clear and comfortable 70F.  One of the members brought home made egg rolls.  There is something about eating at training fields that makes the food taste better than anything you find at a restaurant. 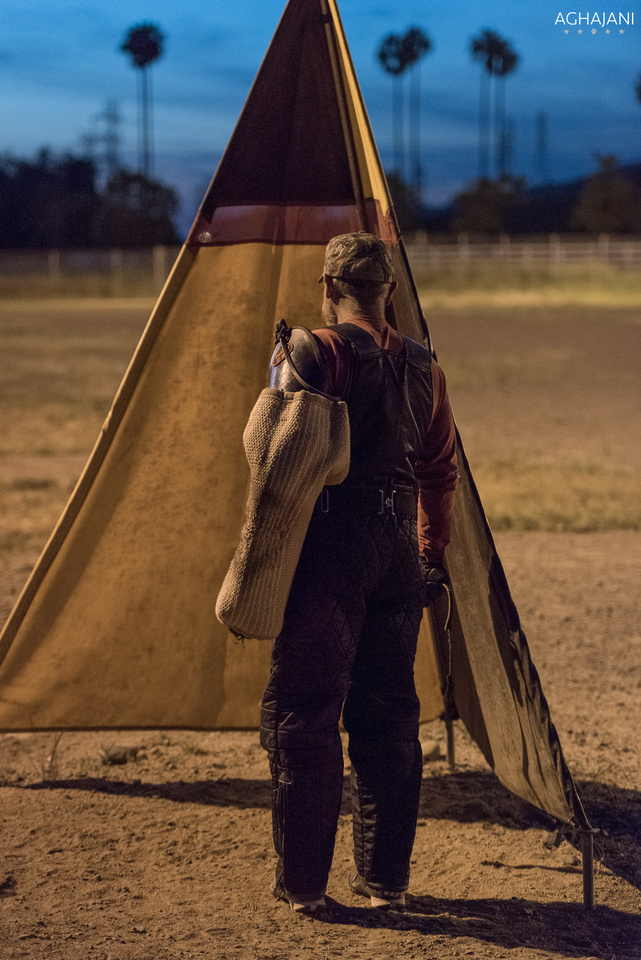 And so begins another evening of training.  More than a decade later.

Photographing fast moving dark objects in extreme low light does not make for a happy photographer. The low light reduces contrast and makes focus difficult.  Slow shutter speeds are needed to get reasonable exposures which means inevitable blur. These conditions are opposite of whats needed for sharp images.  But I was happy to just be part of the energy of this evening and would I would make do as best as I could.   Although I could freeze the action with flash, I opted for minimal flash so I could bring in some of the environment for context.  I have the new Nikon D5 which is the best low light sport camera available as of this writing and earned its keep in these conditions. 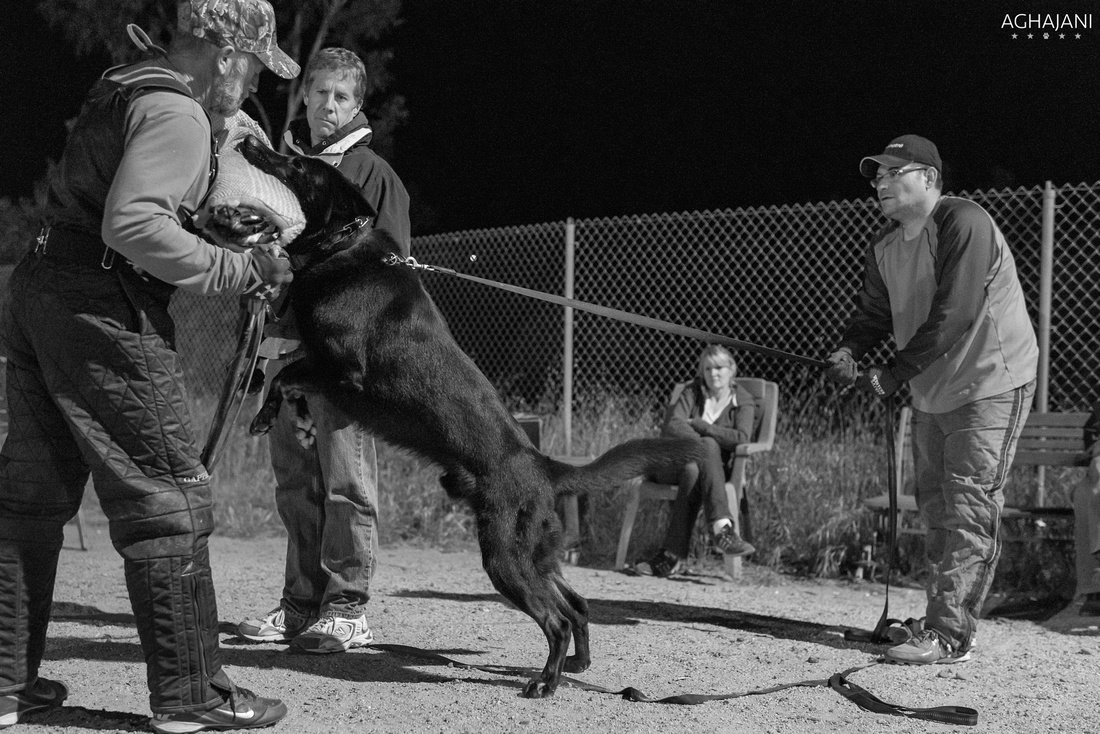 Mario Fernandez working the back line.

Mario Fernandez has been Dave's primary assistant helper for years.  While an outstanding and safe training helper in his own right, Mario is exceptional in his obsession with pedigrees and IPO history. The obscure dog sport facts, trainer achievements, trial scores and pedigree details he can recite from memory is nothing short of amazing. 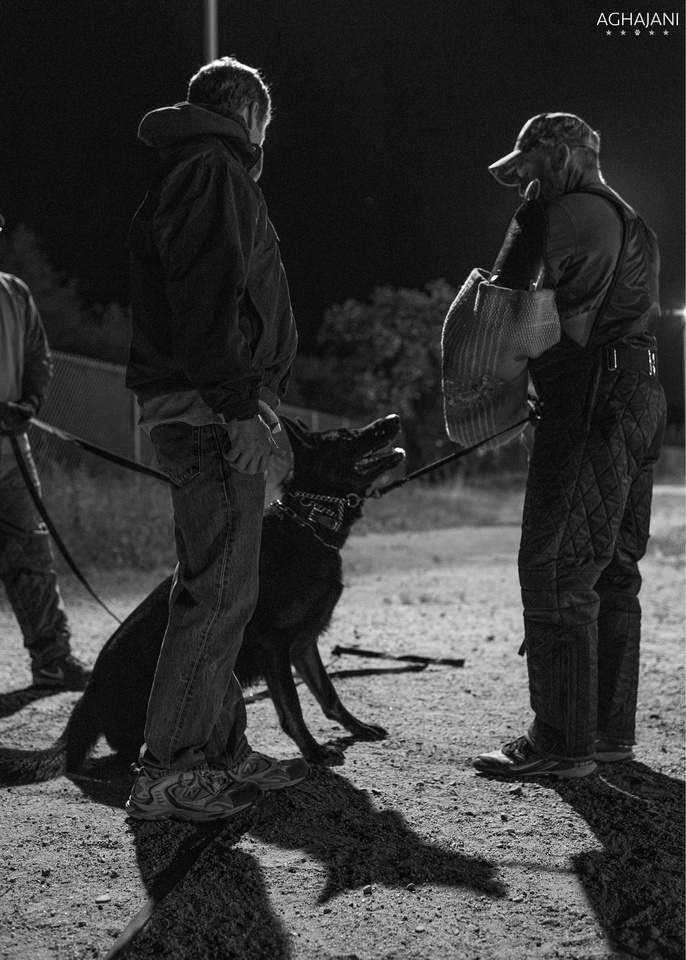 Like a high school reunion, coming home to my first club was full of seemingly conflicting emotions, a cocktail of happiness and melincoly.  I stayed until the last flood light was turned off.  Something inside me wished the night would never end.  I love this field and the people that gather here with a their deep love of dogs.  As I drove away from the field, not knowing when I will be back again, I found myself smiling and so grateful that this place is part of who I am. 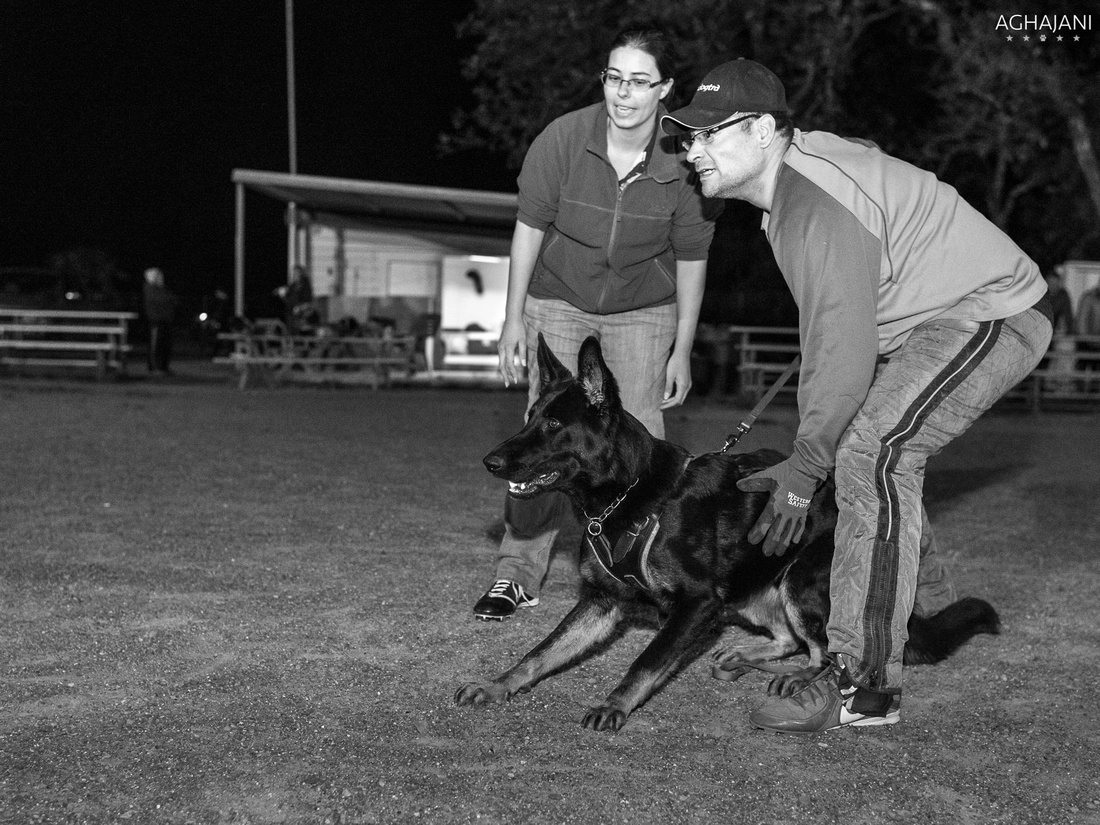 Jamie Ryan and Dante setting up to begin their protection session 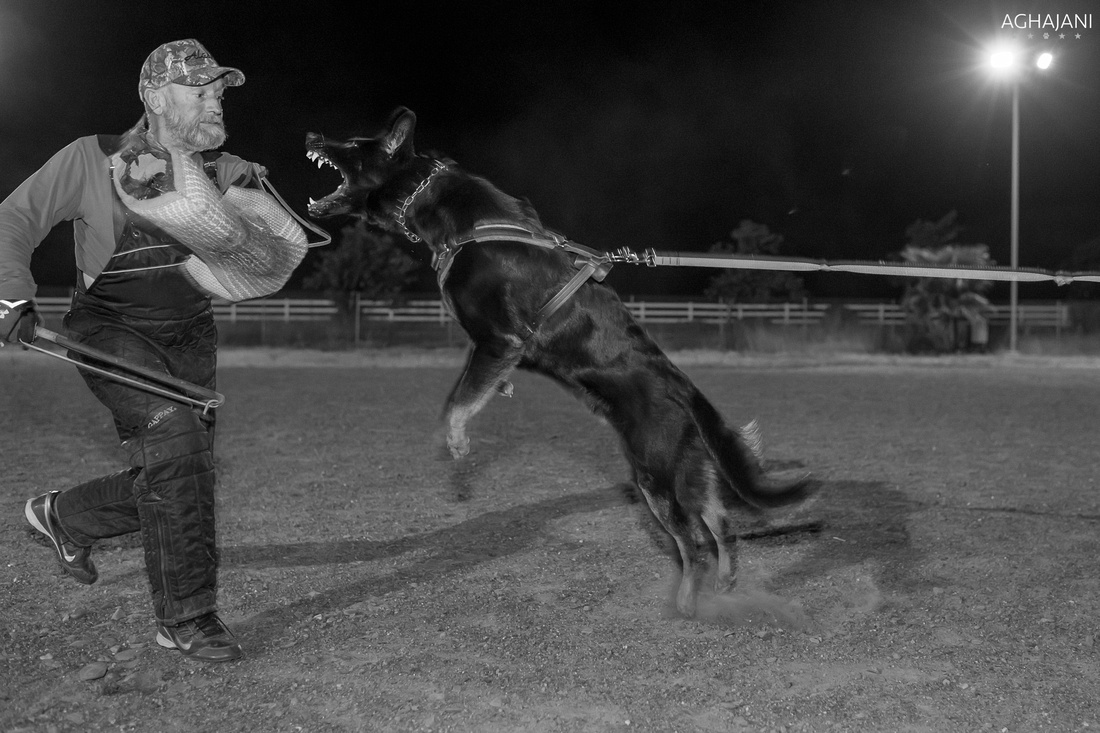 Thank you for following me on this journey. If you would like to be notified of further posts subscribe to my blog.  Feel free to leave comments if you too have a connection with a training club from your past.

best essay service(non-registered)
I have visited this Schutzhund Club last month and realized that this is probably the best club in the country. Many people were already there with their dogs. I was stunned to see some powerful dogs whom their owners were handling very easily.
IVAN BALABANOV(non-registered)
Great job Brian, a beautiful article that captures history!
Ted Bellmyer(non-registered)
This is a great group. I had lots of fun hanging with the trainers up there. We got lots of fun training cant wait till next time
Brian Aghajani Photography
Dave the Thanks goes to *you* my friend. :)
D Deleisaegues(non-registered)
Brian you made me cry.. That level of respect, is all a man can ask for...thank you.
No comments posted.
Loading...
Subscribe
RSS
Recent Posts
Laurie Schweizer, x3 National Champion Jessica Vampola, photographer A Tribute to Gazze von der kleinen Birke Ajay Singh, GSD Ambassador Frank Phillips IGP Renaissance Man Don't give up. Don't ever give up. Lee Hendricks & Kula. Ronny Burmer, National IPO Competitor Ivan Balabanov, The Road Less Travelled After a long break, I have a puppy: Desmo Jake Scott, International Certified Mondioring Decoy
Keywords
ipo schutzhund igp usca GSD german shepherd Dogsport wusv Brian Aghajani Malinois
Archive
January February March April May June July August September October November December
© Brian Aghajani Photography
User Agreement
Cancel
Continue