One of the most enjoyable parts of travelling countrywide to photograph IPO Championships is the people I meet.   Many of the stories are truly inspiring.   I have this silly idea to share these stories in a series of blogs.  This is the second such blog of what I hope will be many. 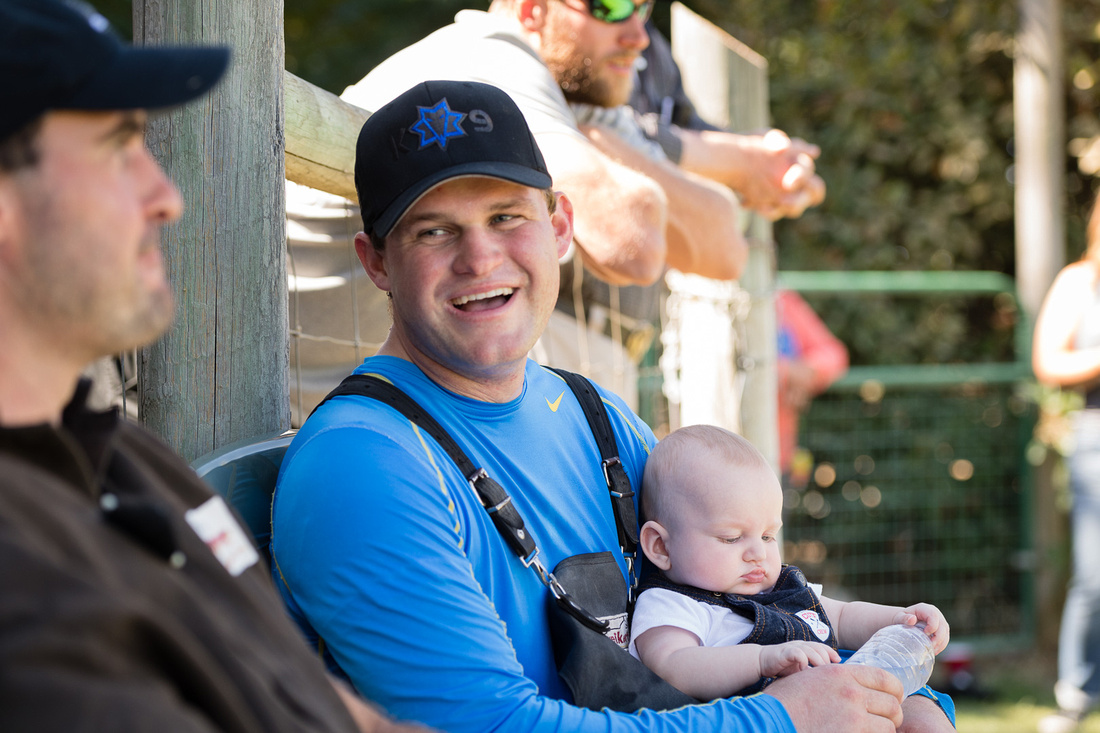 In 2014 I photographed the Northwestern Regional Championship in Lincoln, CA.  It was my first time photographing a Championship IPO event after having been a competitor for more than 10 years.  There I met a relatively new helper named Weston Kester.  I was impressed with his solid and safe technique, intensity and power.  I learned that he had only been doing helper work for a couple of years, which made his performance all the more noteworthy.  However, what really struck me about Weston was his soft spoken and sincere character. This, and the positive, supportive dynamics he has with his charming wife Elise. Now and again one meets folks that replenish your faith in humanity. Weston and Elise are two of these people.

One year earlier Weston and Elise had taken a leap of faith to follow their dream of becoming professional dog trainers.  Doing so would mean uprooting from their home state and semblance of familiarity to seek out the best dog training mentors.  I don’t know too many people that have the courage to leave job, home and security to pursuit their dream, particularly when holding the responsibilities of raising two toddlers.  Yet they did so, and Weston found his mentor in John Riboni of Placer County Schutzhund Club in Lincoln, CA. Elise & Weston moved their entire family to California to train with John, and to open a dog training and boarding business in Loomis called Canine Purpose.

Back-half side transport at 2016 AWDF in Chicago, IL with Frank Philips & Kliff. 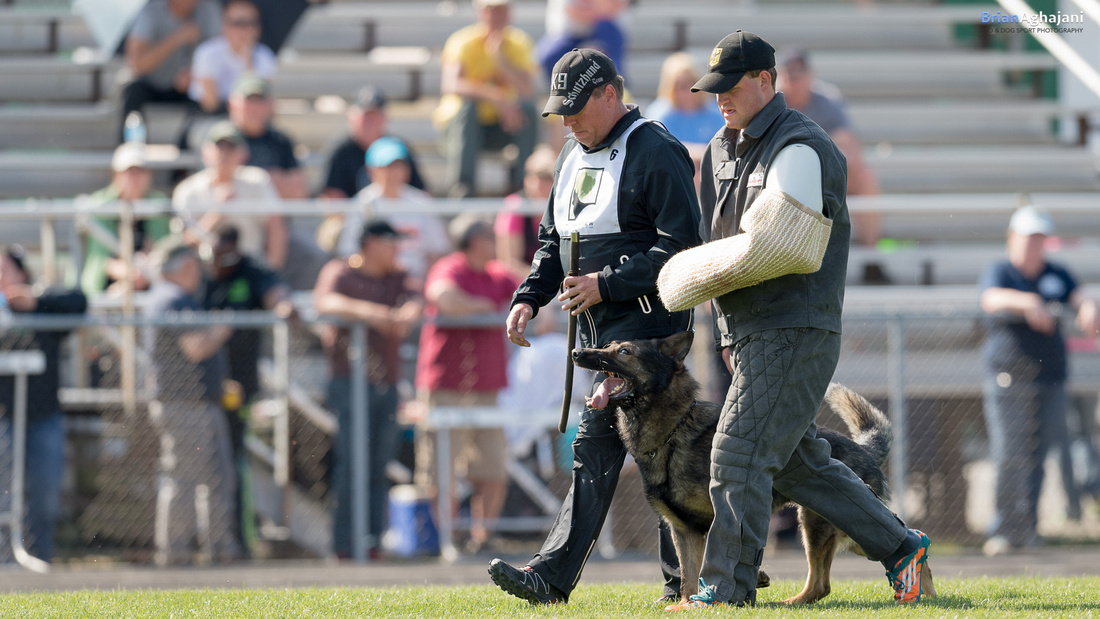 The following year at the 2015 GSD Nationals in Bowling Green, Kentucky, I saw Weston listed as one of the helpers.  I was shocked any helper could develop so fast.  I figured at best Weston could earn a spot as alternate and gain some big event experience.   Not because Weston is not talented, but because the IPO3 helper selections are almost universally awarded to helpers with extensive championship experience.  This is for good reason.  The differences between top dogs is often less than a handful of points, so helpers must be powerful enough to really test the top dogs in the country, and must do so with exceptional technique on dogs they have never seen.  They also must deliver the stamina to repeat consistent performance for up to 80 dogs.  This is not the place to test an unknown helper, and for a very long time now, proven helpers with big trial experience have been the rule. 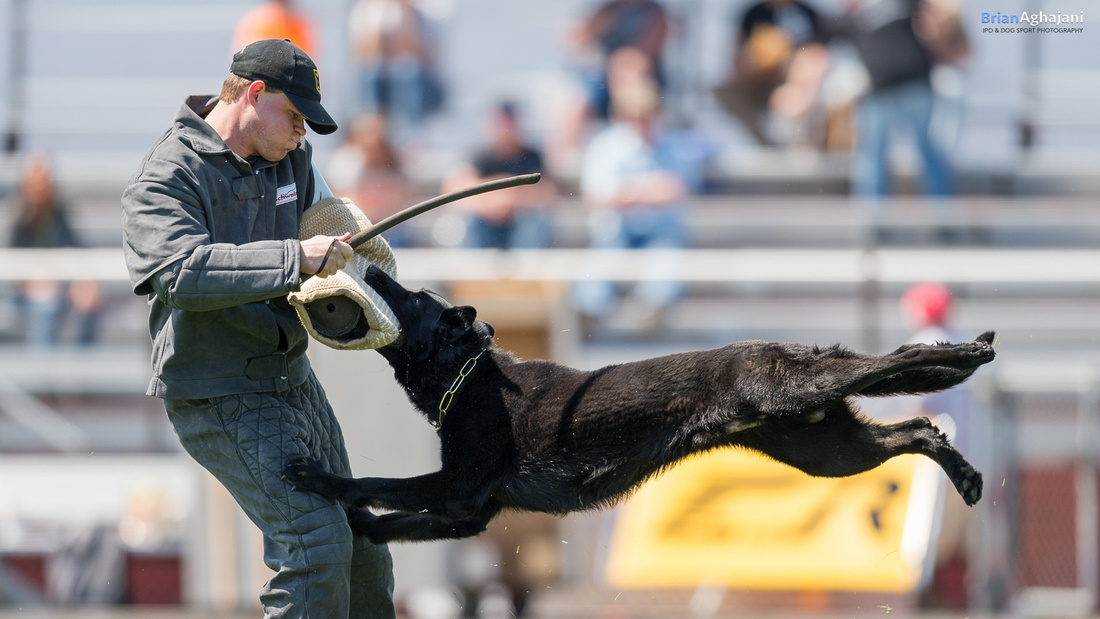 It seems no one told Weston any of this. With his wife and children watching from the side of the field, he gave 100% during his helper tryout.   He impressed all the judges and earned the front-half IPO3 spot! It was an unbelievable achievement and an incredible redemption for having taken that leap of faith to move from Utah to California a few years earlier.  The first thing he did was call John Riboni to share the good news.  There were more surprises to follow as John took the red eye flight to Kentucky to see his protégé in his maiden National appearance.

Attack Out of Back Transport at the 2015 USCA GSD Nationals with WUSV World Champion Debbie Zappia & Iron. 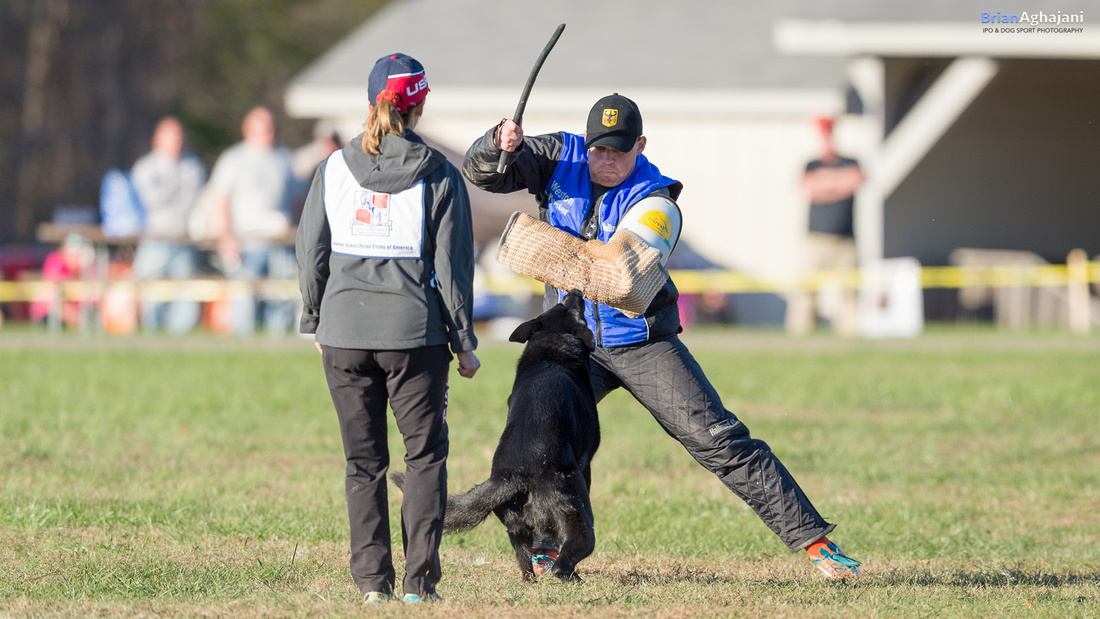 Since that first national event last November, Weston has been selected for the following tho consecutive national IPO events: back-half IPO3 helper for both the 2016 AWDF Championship in Chicago, IL and the 2016 WDC Championship in Chelsea, MI.  Next on the to-do list will be the 2016 USCA Nationals in Merced, CA in November.  No doubt we will see Weston in many National events in the future! 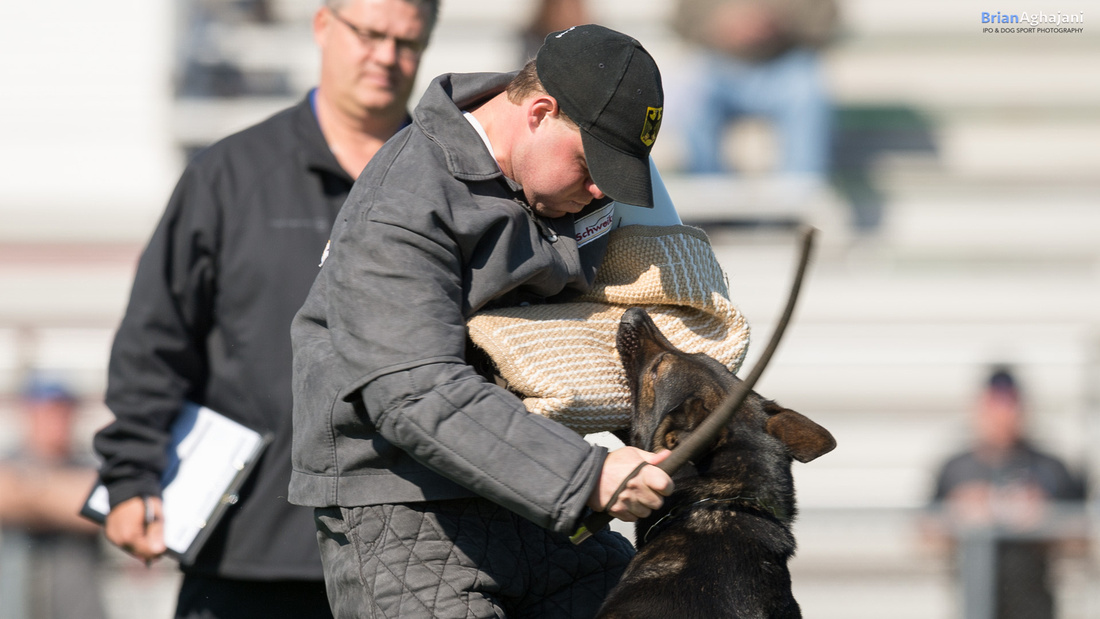 Unflinching in the face of a Ron Wattana's formidable Kash at Weston's first National Championship during the 2016 USCA GSD Nationals. 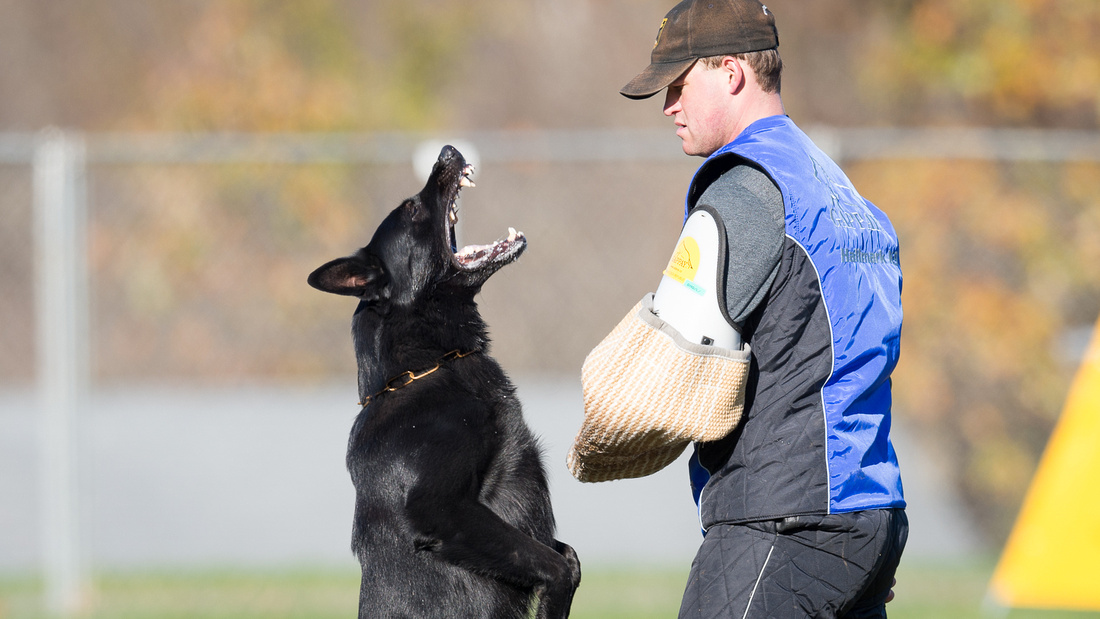 Kester family at the 2015 GSD Nationals in Bowling Green, KY. 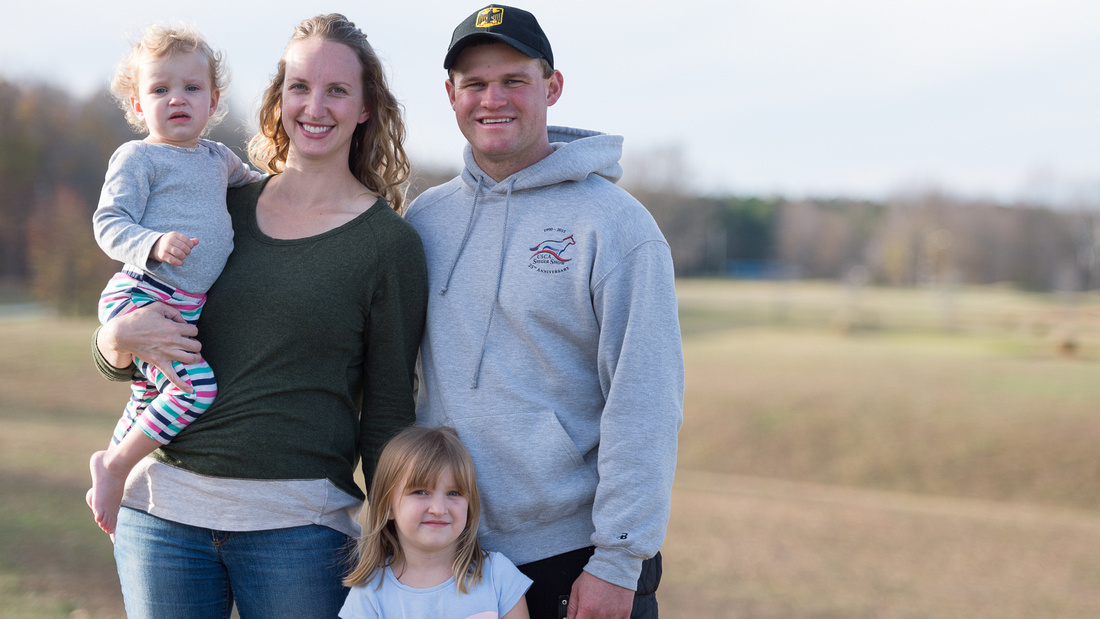 blue diamond dog food ingredients list(non-registered)
i am always looking for some free stuffs over the internet. there are also some companies which gives free samples.

http://spaceonwhite.com/is-a-top-rated-dog-food-worth-the-extra-money/
assignment help(non-registered)
Weston Kester is the best helper I have ever met. He always gives me hope that everything will be alright. He is so supportive and he always knows what to say to make me feel better. I can talk with him about anything, and he will never judge me because he has been there himself. He is also very funny and fun to be around, but at the same time, he is serious when it comes to our work. Weston has helped me in so many ways, and I am thankful for every single one of them.
boiled egg diet plan(non-registered)
I like to read stories that are based on real-life experiences.
john Riboni(non-registered)
Maybe Manuel Perez could show us all how to do it next time? Brian thank you for all you do. Your the best!
Manuel Perez(non-registered)
Saw his performance, didn't believe he was a strong helper to be in nationals, he couldn't keep his footing during the drive- and lucked extremely nervous with different dogs- performance varied
No comments posted.
Loading...
Subscribe
RSS
Recent Posts
Laurie Schweizer, x3 National Champion Jessica Vampola, photographer A Tribute to Gazze von der kleinen Birke Ajay Singh, GSD Ambassador Frank Phillips IGP Renaissance Man Don't give up. Don't ever give up. Lee Hendricks & Kula. Ronny Burmer, National IPO Competitor Ivan Balabanov, The Road Less Travelled After a long break, I have a puppy: Desmo Jake Scott, International Certified Mondioring Decoy
Keywords
ipo schutzhund igp usca GSD german shepherd Dogsport wusv Brian Aghajani Malinois
Archive
January February March April May June July August September October November December
© Brian Aghajani Photography
User Agreement
Cancel
Continue